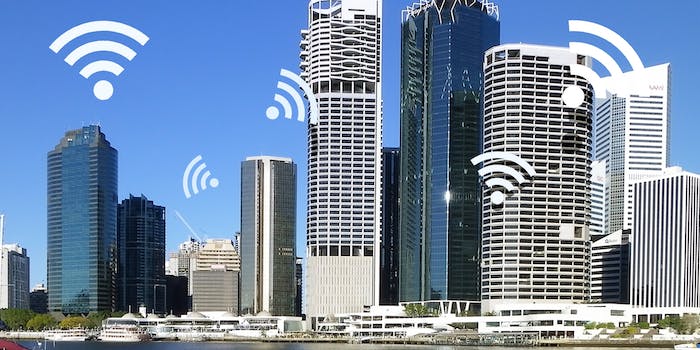 Conservative states told the FCC to back off of their laws. Silicon Valley says, 'Not so fast.'

Silicon Valley’s largest trade group is backing the FCC in a lawsuit challenging the agency’s authority to stop states from restricting city-run broadband.

The Internet Association, whose members include Amazon, Facebook, Google, Netflix, Twitter, Uber, and Yahoo, filed a brief on Thursday with the U.S. Court of Appeals for the Sixth Circuit rebutting claims by Tennessee and North Carolina that the Federal Communications Commission overstepped its authority with the municipal-broadband rules it adopted in February.

Tennessee had passed a law forbidding the city of Chattanooga from expanding its government-run broadband network into nearby rural towns not served by reliable broadband. North Carolina did the same to stop the city of Wilson from expanding its network. Both cities asked the FCC to preempt the laws, and the FCC did so, citing their anticompetitive nature.

Tennessee responded that the FCC’s rules impinged on what it called a state’s “inviolable right to self-governance.” North Carolina alleged that the commission “unlawfully inserted itself between the State and the State’s political subdivisions.” The two states sued the agency, and the cases were consolidated.

In its brief, the Internet Association pointed to the case Verizon v. FCC, in which the U.S. Court of Appeals for the D.C. Circuit struck down the FCC’s first attempt at net-neutrality rules but generally upheld its authority to regulate broadband under the Telecommunications Act of 1996.

Section 706 of that law declares that the FCC “shall encourage the deployment on a reasonable and timely basis of advanced telecommunications capability to all Americans” by using, among other tools, “measures that promote competition in the local telecommunications market” and “regulating methods that remove barriers to infrastructure investment.”

“Verizon provides that the Commission has the authority to take steps to accelerate broadband deployment that is not reasonable and timely,” the Internet Association said in its brief. “Applying the Verizon court’s holding, it was reasonable for the Commission to determine that its Order was an appropriate exercise of its Section 706 authority.”

The FCC is fighting two high-profile legal battles over its broadband regulations; the other concerns the net-neutrality rules it adopted in February to replace the ones that the appeals court struck down in Verizon. The Department of Justice made headlines on Monday for refusing to support the FCC in the municipal-broadband case, saying it “takes no position” on the agency’s authority. The DOJ is supporting the FCC in the net-neutrality case.

“Broadband Internet access is to today’s Americans what access to electricity was in a previous era,” Abigail Slater, the Internet Association’s vice president of legal and regulatory policy, said in a statement. “The Internet Association supports the FCC as well as the local communities that are protecting the right to invest in their future.”

Photo via bert knottenbeld/Flickr (CC BY 2.0) | Remix by Max Fleishman