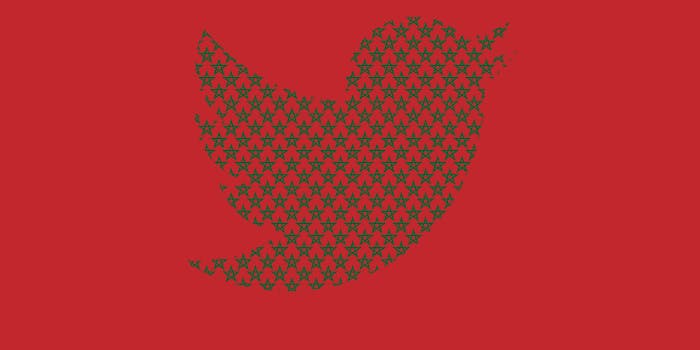 For the past three months, an anonymous Twitter account has been leaking classified Moroccan diplomatic documents, much to the dismay of the African country’s government.

“Le Makhzen,” or @chris_coleman24, is referred to routinely in regional press as “Morocco’s Snowden,” in reference to National Security Agency whistleblower Edward Snowden, and is commonly compared to WikiLeaks and its founder Julian Assange. The account began disseminating classified documents and correspondence from the government’s Ministry of Foreign Affairs and General Directorate for Studies and Documents early in October this year. Some of the “leaks,” however, reportedly include fabricated misinformation.

On Dec. 17, after three months and thousands of leaks, Twitter suspended Le Makhzen, but not before another similar account emerged to take over the reigns. As of early December, the original account had over 3,200 followers.

The Moroccan government failed to issue any official response to the leaks, least of all to deny their authenticity, until earlier this month.

Algeria-Morocco relations have been icy since both countries gained independence from France in the 1950s and 60s; their mutual borders have been closed since Algeria’s civil war in 1994.

Tensions between the north-African neighbors are most volatile over the disputed territory, Western Sahara, over which both countries claim sovereignty. The region has a burgeoning independence movement of its own, spearheaded by separatist movement the Polisario Front, which the Moroccan government has also blamed for the leaks.

Foreign Minister Salaheddine Mezouar recently accused Algeria of “fueling the conflict over the Moroccan Sahara,” adding the provocation would not deter Morocco from securing its borders or ensuring its national security.

Moroccan government spokesperson Mustapha El Khalfi said Algeria’s alleged leaks will have little impact, warning, “these desperate attempts will not deter us from advancing towards maintaining the territorial integrity and the defense of the nation and its institutions.”

Some of the leak’s most incriminating revelations suggest that government officials have been bribing foreign diplomats and journalists into supporting the Moroccan government’s vision of the conflict in Western Sahara, which has at times proven armed and violent.

In addition, the documents reveal details of the Moroccan government lobbying in the United States government in an effort to shine a more positive light on Morocco’s questionable human rights record. Leaks also show Moroccan government communications with Israeli secret service—embarrassing in part because Morocco is among a cohort of predominantly Muslim countries that do not officially recognize Israel—and allegations that Moroccan ministers attempted to get their children consulting jobs in France with the help of French diplomats.

Brian Whitaker, former Guardian Middle East Editor and only one of a handful of international journalists to comment on the leaks, wrote that the documents have failed to gain much traction outside Morocco because they have revealed little information that is not already common knowledge or at least suspected of the Moroccan government.

Incriminating details of institutionalized corruption in Morocco became a matter of public record with the leaked U.S. Embassy cables in 2010, published by WikiLeaks, which revealed that Moroccan royalty used government institutions to “coerce and solicit bribes” from the private sector.

In October, French journalist Jean-Marc Manach investigated hundreds of the documents leaked by Le Makhzen, discovering some were likely fabricated. He wrote: “[A]nalysis of hundreds of documents posted by the mysterious whistleblower … reveals that this operation, according to the best rules of the genre, skillfully blends authentic and manipulated documents.”

The leaks have yet to reveal details of Morocco’s most pertinent national issues, including details of its questionable human rights record or the emergency it faces on the growing numbers of its population traveling to fight alongside the Islamic State (also known as ISIS or ISIL); according to figures from the UN and BBC, as many as 1,500 Moroccan nationals are fighting with Islamic State in Iraq and Syria.