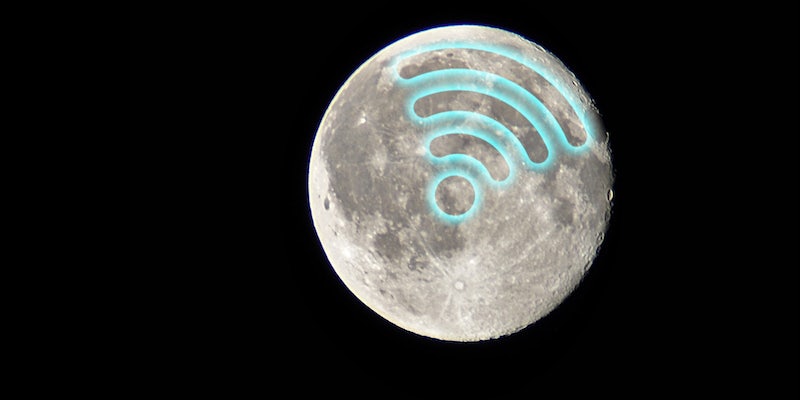 Wi-Fi is going to the moon—and possibly beyond

In space, no one can hear you stream.

Isaac Asimov’s vision of colonies on the moon just inched a little closer to reality. According to researchers from NASA and MIT, it might be possible to experience the same kind of data connectivity in space as we do on Earth, right down to file transfers and video streaming.

NASA’s had designs on getting Internet to the moon since last year, when the organization managed to fire the world’s fastest Internet connection toward LADEE (Lunar Atmosphere and Dust Environment Explorer), transmitting data between Earth and the moon at a rate of 19.44 megabits per second. The researchers behind that experiment will unveil the full details at the CLEO: 2014 conference in June.

“This will be the first time that we present both the implementation overview and how well it actually worked,” Mark Stevens of MIT’s Lincoln Laboratory said in a press release. “The on-orbit performance was excellent and close to what we’d predicted, giving us confidence that we have a good understanding of the underlying physics.”

The underlying physics, from what we can grasp, involve four separate telescopes, together generating 40 watts of transmitter power, sending information coded as pulses of infrared light to the moon. A receiver mounted on a satellite orbiting the moon collects the pulses, which are focused into an optical fiber and amplified about 30,000 times, then converted into electrical pulses that are themselves converted into data bit patterns.

Less than a billionth of a watt from the original 40-watt signal reaches the satellite, but according to researchers, that’s still 10 times the amount of signal needed for reliable communications.

Because the signal sent out is so great, the researchers feel confident the system can operate through thin clouds in the Earth’s atmosphere. They also predict their data transmission techniques can be extended to deep-space missions to Mars and other planets.

The moon’s surface is not exactly fit for habitation yet, what with its unbreathable atmosphere, no food to speak of, and water that’s not exactly potable. However, what’s a little starvation and suffocation when you’ve got your Netflix, right? In space, no one can hear you stream.