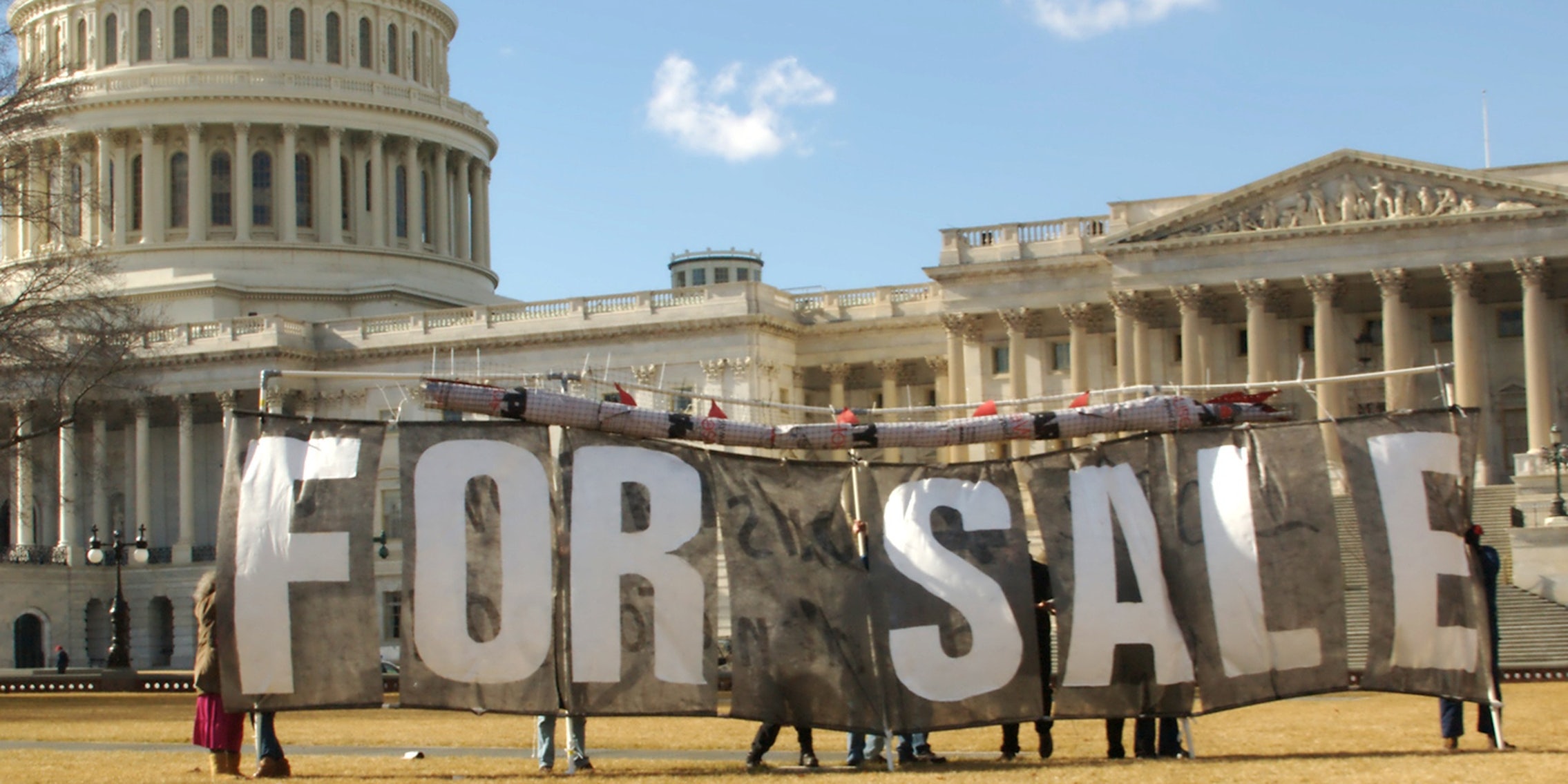 Forget what you know about U.S. campaign finance. The real action is happening in the dark.

Forget campaign donations. Forget super PACs. Forget what you think you know about financing a U.S. election. The real story lies in the shadows, and one team of journalists has begun to drag that slippery beast into the sunlight.

In his application to the Knight News Challenge for his project “Inside the 990 Treasure Trove,” Robert Maguire, the political nonprofits reporter for the Center for Responsive Politics (CRP) and the head of this project wrote, “Journalists and voters need to know more about dark money—the funds spent on campaigns from undisclosed sources.”

Dark money is the political spending by tax-exempt 501(c)4 “social welfare organizations.” Nonprofits with this designations are free from any obligation to announce where their money comes from. The dark money reaching campaigns rose from $6 million in 2004 to $309 million in 2012.

To qualify for this designation, an organization “must be operated exclusively to promote social welfare,” according to the Internal Revenue Service (IRS). And to do so, “an organization must operate primarily to further the common good and general welfare of the people of the community.” The problem is, many groups that have secured this status qualify for that only if you believe that extremely partisan groups with specific political goals fall under that designation.

Maguire told the Daily Dot that pretty much all current presidential candidates are supported by 501(c)4 organizations. They know that neither the Federal Elections Commission (FEC) nor the IRS are going to do anything to enforce the behavior of such groups. So Republican candidate Sen. Marco Rubio (R-Fla.), for instance, has the Conservative Solutions Project, which has spent $2 million on television ads touting his stance on Iran.

In essence, super PACs are for the big mouth donors—the 1-percenters who want the world to know their wealth and influence—and 501(c)4s are for those who want to stay hidden behind the curtain.

The protections surrounding 501(c)4 status make the groups that secure that designation so opaque it is nearly impossible to figure out who is donating millions of dollars to stop gay marriage, say, or to toughen gun regulations.

Maguire’s project, in conjunction with the data-transparency nonprofit GuideStar, has leveraged methodologies developed by the CPR to surface dark money information from 990s, the IRS forms for tax-exempt organizations, and reconcile it with Federal Election Commission and other campaign-finance data.

The CRP has tracked $1 billion since 2008. The largest “dark money network,” as Maguire calls it, has pledged to raise the same amount of money in this presidential election cycle alone. So its importance is greater than ever. 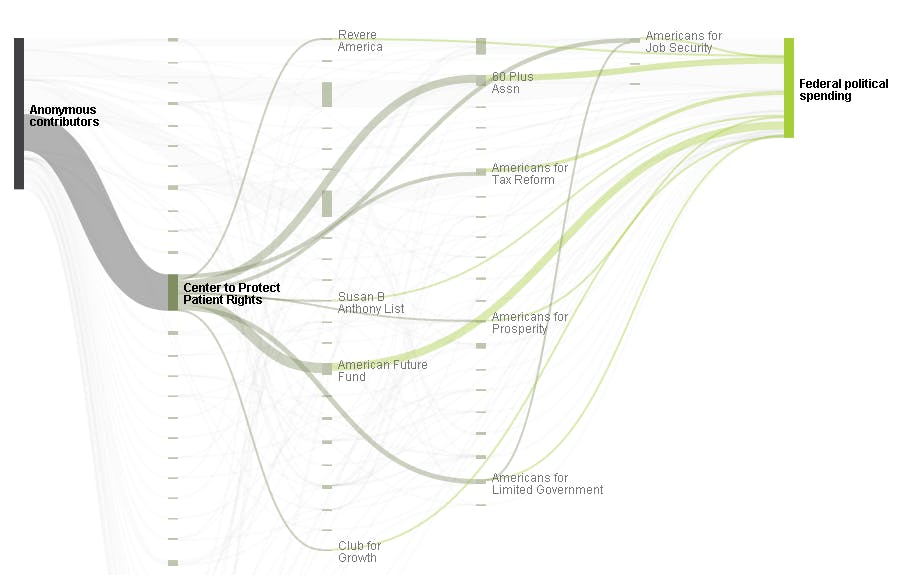 Inside the 990 Treasure Trove

“Citizens and voters,” wrote Maguire “face the risk of not knowing who is financing their elected officials’ victories or defeats.”

By the end of 2015, thanks to a $525,000 Knight News Challenge grant, Inside the 990 Treasure Trove will launch a robust public website on real estate provided by the CPR’s OpenSecrets.org. GuideStar will provide extraordinary access to data. The CRP methodologies and the increased data will allow users “to find sham nonprofits that are directing funds to firms owned by the directors or employees and their friends or associates” and to discover “whether a nonprofit is effectively ‘election-oriented’ and therefore which are engaging in direct political speech and therefore “are circumventing IRS limits on political activity,” according to the project’s mission.

It is important to note that, by and large, the identity of individual and corporate donors to 501(c)4s will be difficult if not impossible to unearth. What is possible, thanks to the painstaking manual entry of data by the CRP, and now GuideStar, is the flow of money between nonprofits and private companies, such as political consultants and media companies.

John Bracken, vice president of media innovation for the Knight Foundation, told the Daily Dot that the funding of Inside the 990 Treasure Trove derived in part from how the foundation framed the question that powered the challenge. Namely, “how to better inform and increase participation before, during, and after elections.”

Both the CRP and GuideStar displayed “a history of commitment to telling stories to the public about election financing,” the Knight Foundation wrote. Another focus of the challenge was collaboration, so the fact that two strong groups were collaborating to create something neither could do alone was attractive and underlined one of Knight’s emphases.

“Citizens and voters face the risk of not knowing who is financing their elected officials’ victories or defeats.”

Inside the 990 Treasure Trove was based on CRP’s work, which includes over 30,000 manually entered tax reports and 24- and 48-hour dynamic FEC finance updates. By meshing GuideStar’s data, the resources available should dramatically increase in both quantity and utility.

A major component of the project’s new website will be visualizations. Given how confusing the movement of money is between the groups and out of them, data visualization will provide users a way to quickly grasp the implications of where the money comes from and where it goes, unearthing the use of surrogates to sidestep spending rules. The site will issue analyses, both major studies and short-term updates on financing.

One example Maguire gave for how the site might be used relates to political consultancies. Whereas before the Citizens United ruling, these organizations may have brought in tens of millions of dollars annually, they now make hundreds of millions. Who is paying them? What are they being paid to do? (Make slick commercials about a candidate’s stand on Iran, perhaps?)

Dredging up instances of poor faith in politics and misrepresentations in financing may be a sort of sociological butterfly effect. The initial results of such effort may not be terribly inspiring, but who knows what it will do to the chaotic U.S. political system by the time it cycles all the way through?

Photo via takomabibelot/Flickr (CC BY 2.0) | Remix by Jason Reed