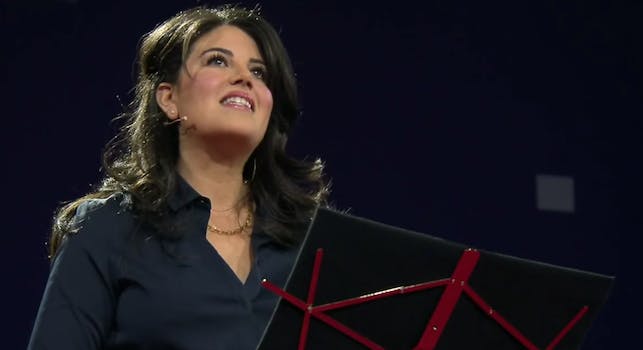 'This scandal was brought to you by the digital revolution.'

After more than a decade of exile from the public eye, Monica Lewinsky is speaking out about cyberbullying.

Following an essay in Vanity Fair a year ago, she took to the stage for a TED Talk called “The Price of Shame.” The talk is a funny, smart, and important take on the light-speed virus of vitriol that the Internet enables.

Lewinsky was one of the first and worst victims of cyberbullying in the late ’90s, when she became the center of global attention for having an affair with then-president Bill Clinton.

“This scandal was brought to you by the digital revolution,” Lewinsky said. “That means we could access all the information we wanted, when we wanted it, anytime, anywhere. And when this story broke in January 1998, it broke online. It was the first time the traditional news was usurped by the Internet for a major news story.”

For nearly two decades now, we have slowly been sowing the seeds of shame and public humiliation in our cultural soil. Gossip Web sites, paparazzi, reality programming, politics, news outlets and sometimes hackers traffic in shame.

Public humiliation as a blood sport has to stop. We need to return to a long-held value of compassion and empathy.

“Not a day goes by that I’m not reminded of my mistake,” said Lewinsky, who was in her early twenties when she reached global infamy. “And I regret that mistake deeply.”