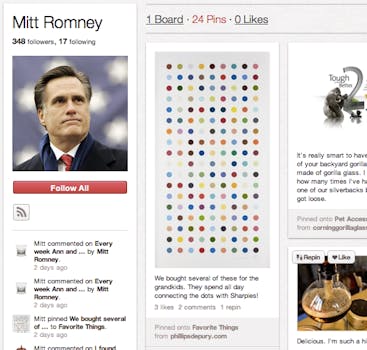 For the politician’s campaign team, however, it was no laughing manner. The campaign asked Pinterest to rename the “misleading” profile to “fakemittromney” or something similar.

Pinterest was ready to comply, but the account holder, Eric Spiegelman, was not ready to give up so quickly.

“[T]his fake Mitt Romney thing is starting to be about Pinterest changing the name of my parody account, and not about the fact that the leading candidate for the Republican nomination for President asked them to dilute criticism about him. This was never my intention,” wrote Spiegelman in a public apology to Pinterest.

After the Romney parody met resistance from the candidate himself, Pinterest Community Manager Enid Hwang contacted Spiegelman about changing his account’s name:

“We actually really appreciate political commentary on Pinterest – and I know your account is clearly satirical – but we’re a young company so we don’t have a feature/process in place for ‘verified accounts’ (such as Twitter) which would make the purpose of your account immediately obvious to any user on the site.”

Spiegelman insisted his account was an exercise in free speech, and that the parody should be “obvious.”

“[Y]ou’re a publishing entity that’s more or less open to the public, and I can’t in good conscience change my parody at the request of the subject of that parody,” he wrote back. “I understand that you are well within your rights to delete my account. But I really hope you choose not to.”

Gawker reported that Spiegelman was frustrated by the change. He complained that the transfer killed his links. However, the Internet humorist wrote an apology to the Pinterest team on his blog in order to clarify that it’s not the image-sharing network he’s upset by—but Romney himself.

“Mitt Romney wants to become president of a country that cherishes the right to make fun of its leaders. It seems clear that his team could not handle a little bit of skewering by a social media account that, at the time, had only 47 followers, and it’s pretty awful that they’d ask Pinterest to ‘fix it.’ … This far, far outweighs, in my mind, the fact that Pinterest acceded to his request.”