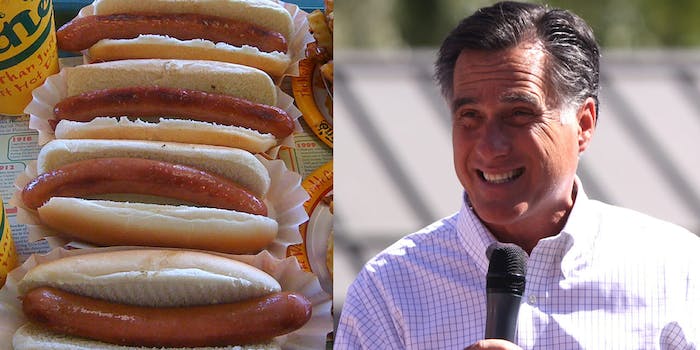 Mitt has had some food faux pas in the past.

Mitt Romney, the former Republican presidential candidate currently running for Senate in Utah, told a news outlet recently that his favorite meat is hot dogs, and people aren’t buying his attempt to seem down-to-Earth and all-American.

Romney made the comment during an interview with the Washington Examiner. Besides making the claim that hot dogs are his favorite kind of meat, he went further by setting the record straight: hamburgers are his second favorite.

Here’s how the Examiner put it:

Romney is “brilliant” in his ability to analyze complicated problems and formulate solutions and “sophisticated” in his understanding of politics, those in his orbit say. Yet he is not a complicated person, with simple tastes that can seem out of place with a man worth hundreds of millions of dollars.

“My favorite meat is hot dog, by the way. That is my favorite meat,” he told a gathering of supporters as they joined him recently for a casual dinner organized by his campaign. “My second favorite meat is hamburger. And, everyone says, oh, don’t you prefer steak? It’s like, I know steaks are great, but I like hot dog best, and I like hamburger next best.”

This isn’t the first time Romney has bungled the “I’m relatable” thing when it comes to food. As CBS News pointed out, the now-Senate candidate tried to relate to a Mississippi crowd in 2012 by saying he had “a biscuit and some cheesy grits” for breakfast.

Apparently it’s never called “cheesy grits” in the southern part of the country. He also called a sandwich a “sub” instead of a “hoagie” when visiting Pennslyvania during the same year.

Romney’s hot dog revelation was all the rage on Twitter on Friday afternoon.

MY FAVORITE ANIMAL FLESH IS THE MEAT SOCK FILLED WITH GROUND ANIMAL FLESH
BC I AM A PATRIOT https://t.co/mosUvmmmgn

Mitt Romney's Favorite Meats:
1. Hot dog
2. Hamburger
3. Chicken nugget
4. Slurpee™
5. Cigarette
6. Country-Western Music
7. Love? Am I pronouncing that right?
8. Definitely not human, where would you even get that idea? I shall laugh boisterously now.

Mitt Romney seems like the type of guy that says "Hot dog!" every time he's excited about something.

MITT ROMNEY: My favorite meat is hot dog, while my preferred libation is Keystone Light, consumed at a sportsball event.

Let’s face it: hot dogs are nowhere near the top of anyone’s “favorite meats.”