Is the era of Anonymous fading?

A year ago Wednesday night, I tweeted and retweeted from my New York City apartment at the helm of the largest Anonymous Twitter handle, updating the account’s followers with regards the annual global protests of Guy Fawkes Day, also referred to as the Million Mask March (#MMM). But this year, I temporarily left my keyboard, and made way through the streets of the nation’s capital amongst the face-hidden crowd.

As I went down Washington’s 16th Street close to 5:00pm, sloping toward the White House, a small string of protesters walked parallel to me in the middle of the street.

Arriving before the presidential residence, the group of a dozen people joined hundreds more, and congregated in front of the West Wing’s security gate.

Anonymous has arranged physical protests for diverse, sometimes niche, causes since late 2007 and early 2008, when it declared war and claimed some victories on the mass-mind-control society of Scientology.

The Million Mask March is Anonymous‘ annual day of protests, held around the world in cities big and small. From four-person marches on a Daytona boardwalk, to throngs in London, and hundreds in Washington and New York, digital activists step away from 4chan, Twitter, IRC chat rooms, and botnets to celebrate Guy Fawkes Day and troll their way through city streets.

Taunting Secret Service officers, protesters made room for members of the press who exited a briefing where Obama congratulated the GOP’s House majority victory in the wake of Tuesday’s midterm elections: “I am the president of the United States,” Obama said on the other side of a wall in the distance, “and I think, understandably, people are going to ask for greater accountability and more responsibility from me than from anyone else in this town.”

Anons with megaphones shouted toward the North Lawn demanding milk and cookies.

The glob of around 200 people next went on a misguided walk west on Pennsylvania Ave. with the Church of Scientology rumored as its destination. Actions toward the church were, in fact, where the leaderless Internet activist group first grew a name in its 2008 Chanology operations.

Hooking back on I Street, the protesters instead congregated at McPherson Square, home of Occupy D.C.’s 2011 meeting grounds.

Two blocks east, at Franklin Square, and 20 minutes later, the flurry of Guy Fawkes masked rallied outside the headquarters of Monsanto, the agricultural behemoth that everyone seems to hate. About a dozen of the marchers headed inside, barking out anti-GMO chants. Police officers hurried into the lobby to assist the building’s security in bringing the protesters back outside, but refrained from making arrests.

A group of undercover cops stood across the street and stared down into the glow of their smart phones, walkie-talkies peaked out from under one of their North Face jackets. 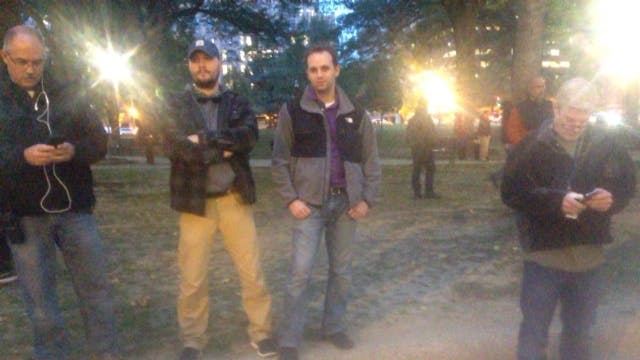 The internet activists continued to weave through the district’s downtown, as if physically embodying one of the group’s go-to DDoS (distributed-denial-of-service) attacks: gridlocking rush-hour traffic, looting a promotional Redbull vehicle for energy drinks (those poor brand ambassadors!), laying down in busy intersections, sometimes clashing with agitated drivers.

Turning eastward on Pennsylvania Ave., the group of Internet activists reminded the cars stuck in oncoming traffic that they, too, “are the 99 percent!” and made way for the J. Edgar Hoover building. FBI officers awaited the activists who’d already made their way past the building multiple times throughout the day.

Despite the turnout in D.C., it’s hard not wonder if the larger Anonymous movement has become faint flicker. While niche operations continue to capture the spirit of protesters and political activists across the country, Occupy’s online nervous system has crumbled. Warring factions battle out their differences, and claim creeds in cyberspace, yet the consensually hallucinating, masked crowd march, and longboard, and rollerblade together with all the merriment of Comic Con cosplayers.

Protestors for the Internet freedom group Fight for the Future are holding their own rally outside the White House Thursday night in a last-ditch effort to keep Internet service providers from ruining the Web. And I’m already on my way back to New York—but it’s a safe bet that some Guy Fawkes masks are there in the rain, offering some comic support.