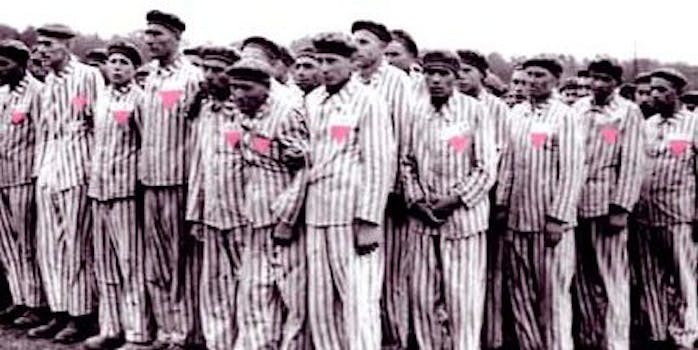 Don't complain unless you fought the Nazis.

“I don’t know who needs to hear this, but don’t hit publish on that millennial hot take,” host of NPR’s It’s Been A Minute Sam Sanders tweeted in May.

Yesterday, Thiessen published a piece in which he argued that because millennials never “had to walk through a sewer waist-high in human filth, choking on the toxic ammonia, yet unable to cough for fear of alerting the Nazi SS soldiers on the street above — knowing that if you did, they would open a manhole cover and toss in grenades or poison gas to kill you,” they should put up and shut up.

Thiessen, who definitely doesn’t look like he’s here to sell you a vacuum, lengthily detailed his actual heroine mother’s bravery as part of the Polish uprising in WWII.

Then he whined that those wimpy idealistic millennials and Generation Z “have demanded ‘emotional safety,’ insisting on ‘safe spaces’ and ‘trigger warnings’ to protect them from ideas they don’t like, because they tell us that ‘words are violence.'”

“There were no ‘trigger warnings’ — only Germans pulling their triggers as they executed civilians and prisoners of war lined up on street corners,” he wrote of WWII.

So basically, if you didn’t fight Nazi tanks with rocks and a bottle of gasoline, you should be subjected to racist and hate speech every-damn-where, otherwise, you’re a sniveling baby. Thiessen must be a real hoot at parties.

Party guest: “Does this contain peanuts? Because I’m deathly allergic.”

Thiessen: “Did you dodge Nazi sniper fire to replenish troops on the battlefield? Then shut up and eat the brittle, Taylor!”

Something about being lectured about how they can’t complain ’cause they didn’t experience WWII by a Generation Xer didn’t sit right with Twitter. “Wow this guy looks young for a ww2 vet,” was one particularly salient point. Another: “He was born in 1967, so I’m guessing he’s never had to do any that either.”

Proverbs 18:21 (DBY) Death and life are in the power of the tongue,

"America: Not As Bad As Nazi-Occupied Poland!"

yeah it's not like there was a decade of violent rhetoric from a right-wing political part leading up to ww2, it just showed up out of nowhere

me, on my way to war:
wow war is so fun i hope my children and their children also have to do this as well. getting ptsd and all my friends dying really builds character

“This sets a new standard for irrational criticism of millennials,” Los Angeles Times reporter Chris Megerian tweeted, followed by, “I’m willing to bet more millennials have dodged IEDs in Iraq and Afghanistan than insisted on ‘safe spaces’ on college campuses.”

See, 52-year-old Thiessen was a speechwriter for Donald Rumsfeld (2001-2004) then George W. Bush (2004-2009), so it’s possible that he deserves credit for some of the weapons of mass destruction (WMD) rhetoric that served as the ruse for invading Iraq to start a war that got a lot of millennials blown up and killed.

Marc Thiessen, who wrote a whole book defending Bush’s torture regime back in 2010, finds much to admire in the Nazi administration of the Warsaw ghetto https://t.co/heiesxEpfr

If you ask Thiessen, unless it was a Holocaust that gave them PTSD and a prosthetic limb, they probably shouldn’t complain about it.