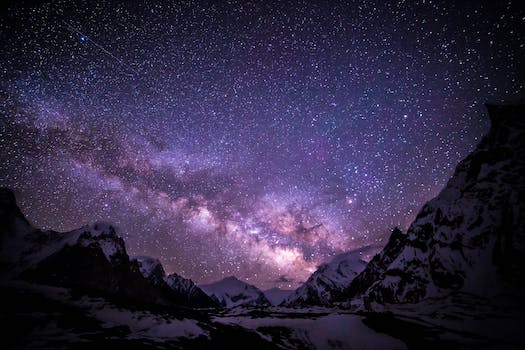 The stars in the night sky have been replaced in most major cities by the many, many lights produced by people. About one-third of the world can no longer see the Milky Way when they look to the sky at night.

According to a recent study by the the National Oceanic and Atmospheric Administration’s National Centers for Environmental Information (NCEI), 80 percent of North Americans and 60 percent of Europeans have their view of the stars of the barred spiral galaxy obscured.

The blockage has been caused by light pollution created by artificial lights. The study found that 80 percent of the world and more than 99 percent of the U.S. and Europe live under light-polluted skies. Many experience a “skyglow” effect, essentially a diffuse glow that can be seen over urban centers that makes the night sky appear empty to those below.

A interactive map created by the Cooperative Institute for Research in Environmental Sciences (CIRES) using the recently published research from the National Centers for Environmental Information shows just how much of the world is impacted by light pollution and it’s staggering to see.

While there are still some parts of North America where the skies can be viewed clearly—primarily in the west, in less densely-populated areas—Europe appears to be completely covered by light pollution, according to the low-light imaging data captured the National Oceanic and Atmospheric Administration (NOAA) and NASA’s polar-orbiting satellite.

However, other parts of the world are still mostly untouched by the issue; Greenland, Central African Republic, Niue, and Somalia all have skies that are over 99 percent clear—a trade-off for developing nations that are still without many of the amenities that cause light pollution.

Light population isn’t new, but its reach is growing and leaking into the skies of areas that were previously untouched by artificial lights. According to the study, the pollution can be seen hundreds of miles from its source, even in areas that are otherwise untouched by humans. For example, the light of Las Vegas and Los Angeles can be seen from Death Valley National Park.

The effects of having stars blotted out of the sky by a low glow are more than just inconvenience for star gazers; it can also have adverse health effects on humans and wildlife.

Research suggests that artificial light at night can increase risks for obesity and depression, and sleep disorders, and may be a risk factor for breast and prostate cancers. It can also disrupt the typical sleep cycle and suppress melatonin production, which can create restless nights and lead to other issues. In Singapore, the most light-polluted country, the skies are so bright that the eye can’t fully adapt to night vision.

Similar stress can be placed on animals that live under light-polluted skies. It can cause anxiety in many animals and, for nocturnal wildlife that stay awake at night, the light can affect alertness and mood.

Light pollution can also lead to a disruption in ecosystems that can lead to chain reactions. For example, skyglow around lakes can prevent zooplankton from eating surface algae. That can result in algal blooms, which can kill off plants that reside in the lake and lead to lower water quality.

While the skies might be covered for now, there is reason to keep looking up. Many governmental bodies are starting to address artificial lighting: The city of Los Angeles is replacing its old street lamp bulbs with efficient LEDs, while France recently set in place a national law that will aim to diminish the amount of light pollution the country produces.

Technology has been a cause of the problem, but it can also be a part of the solution. The study from the  National Centers for Environmental Information suggests adaptive lighting—such as street lights controlled by real-time sensors of traffic and meteorological conditions—can be implemented. The NCEI also floats a future in which public street lighting would not be necessary for driverless cars—though it would still be needed for pedestrians, bikers, and others.