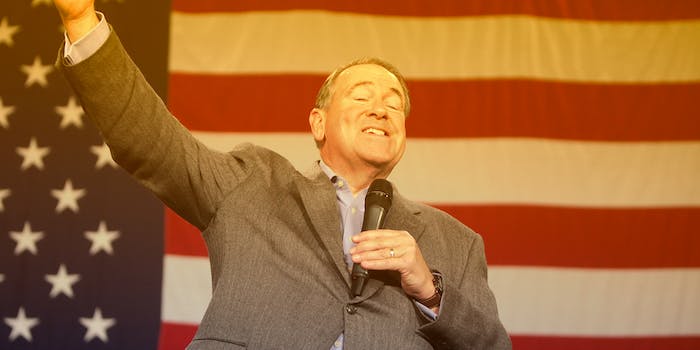 His lawyers have a creative way of looking at intellectual property.

Republican presidential longshot Mike Huckabee has a unique response to the rock guitarist suing him for playing “Eye of the Tiger.”

It’s OK to use the song in a rally celebrating anti-gay Kentucky county clerk Kim Davis’s release from jail in September, he says, because he played it in “a religious nature.”

That’s according to Huckabee’s new defense against Survivor guitarist and Eye of the Tiger co-writer Eddie Sullivan, who filed a suit against Huckabee in November. Sullivan was explicit about his distaste for Davis, who was jailed for refusing to grant gay couples their marriage licenses. “I would not grant [Davis] the rights to use Charmin [toilet paper],” Sullivan said at the time.

The legal team representing Huckabee, a former Arkansas Governor who bases his political persona as a champion of evangelical Christianity, responded that his use of the song counted as fair use, as “the purpose and character of the use was of a non-commercial and religious nature, signifying joy and praise at the release of Mrs. Davis from confinement.”

It’s not clear this is going to hold water. “Pretty much everything surrounding Huckabee and Kim Davis is [silly],” Mark Jaffe, a lawyer at New York City’s Tor Ekeland, P.C., who specializes in intellectual property law, told the Daily Dot over Twitter DM.

The reason? A person can claim fair use as a reason to use a copyrighted work in a religious service, but it’s a stretch to do so in a political one that has some religious overtones.

“I believe that this is the exemption meant for religious services,” Jaffe said.

“The answer is being cute by using ‘religious assembly’ under [section] 110 of the Copyright Act and attributing a First Amendment meaning to it,” he added.

Huckabee has gotten in hot water for unauthorized use of rock music before. In 2008, he made playing Boston’s “More Than A Feeling”—often live, onstage, with former Boston guitarist Barry Goudreau and Huckabee himself on bass—a staple of his presidential campaign that year. But Goudreau’s former bandmate, Tom Schultz, who actually wrote that song and played all its parts, was a Barack Obama supporter.