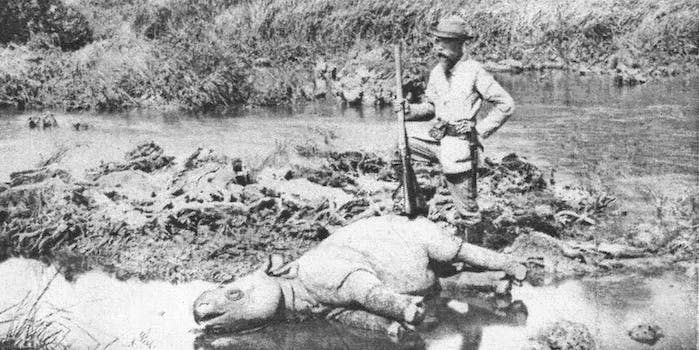 Shocker! Someone is lying on the Internet.

Mike Dickinson might be the greatest troll-politician the Internet has ever seen.

A congressional candidate from Virginia and self-described “left-wing liberal,” Dickinson this week put out a staggering $100,000 bounty for anyone who could provide nude photos of Kendall Jones—a 19-year old Texan cheerleader who’s the subject of some controversy herself over her prolific big game hunting.

Does #KendallJones use vegetables as sex toys? Does she enjoy being spanked? We want to know.

I have 100k to anyone who has nude photos or videos of #kendalljones at Texas tech. She deserves to be a target

A liberal politician going off the rails publicly? You could practically hear right-wing pundits rubbing their hands with glee over the story; the write-up by conspiracy nut Glenn Beck’s The Blaze was shared 25,000 times. Others delighted in pointing out “liberal hypocrisy,” like National Review’s Jim Geraghty:

If @VoteMike2014 were a Republican, he would be national news by now. https://t.co/UYT22ct1Ts

There is, however, a catch. Electoral website Mediaite reports that Dickinson never actually filed the paperwork to stand as a Democratic candidate in Virgina’s 7th Congressional District, despite the fact that he repeatedly billed himself as such. (The real Democrat in the race is Dr. Jack Trammell.) And when he appeared on Fox News, he was called out by host Greta Van Susteren over the fact that he’d lied about being CEO of a chain of strip joints. “I consulted for them,” he admitted.

With no official candidacy, he has no official ties to the Democrat party. After all, it’s hard to imagine the Democratic machine would ever conceivably back a candidate who’s said something of the things he’s said recently.

In other words, Dickinson is a nobody that wants to be a somebody, and certain aspects of the media—keen to feed their own agenda—are happy to help him on his way.

It’s time’s like these when we need to remember rule 14: Don’t feed the trolls.