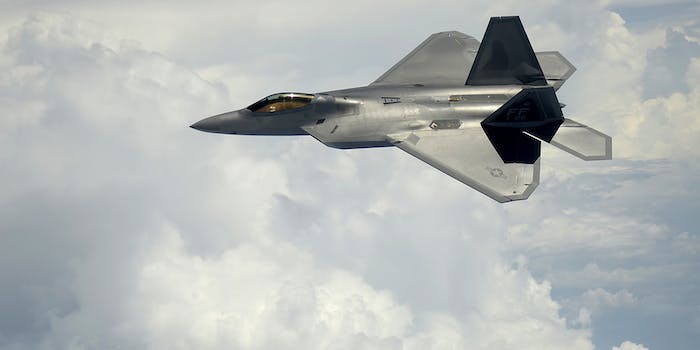 They don’t hate our freedom—they hate our bombs.

We could argue the pros and cons of U.S. air strikes against Islamic State terrorists until we’re blue in the face. But new research shows the people of Syria and Iraq are unlikely to thank us for carrying them out—even if they’re terrified of what comes with Islamic State rule.

By studying more than 2.2 million tweets posted from the Middle East, researchers from Princeton and Harvard have gauged public opinion in the region during the major news events of the last few years.

The researchers, who presented their findings at the recent American Political Science Association’s annual meeting, concluded that citizens of Arab countries don’t have an inherent hatred of Americans, but rather a deep distrust of any U.S. military intervention—oh, and they dislike Iranian intervention even more.

“A lot of the data we have on anti-Americanism is traditionally based on opinion polls,” says David Romney from Harvard University, who was involved with the study. Unfortunately, he says, these polls are often inaccurate.

Romney and his colleagues wanted to know the views of Arab populations in the immediate aftermath of specific events such as the removal of Egypt’s President Morsi from power, NATO air strikes in Libya and the Boston bombings. But it’s near impossible to set up an opinion poll in the Middle East quick enough to do that.

Instead, they retroactively scrubbed tweets originating from the Arab world for keywords like “America” and “White House.” They then used an algorithm to analyze the contents of the tweets and sort them into positive or negative views towards the U.S.

Arabs overwhelmingly abhorred the idea of a U.S. led intervention against Syria’s Assad regime when the Obama administration was considering such a move earlier this year. A staggering 97 percent of tweets, which mentioned the U.S. in relation to Obama’s proposal were disparaging — despite the fact that many Arab tweeters were simultaneously disapproving of Assad.

Romney said he was surprised to learn that during the terrorist attacks on the Boston marathon, there was also a fair amount of negative tweeting going on in the Arab world. However, he says, many of these tweets weren’t reveling in the suffering of Americans. They were instead irritated at their countries’ media for the rolling news coverage of an event half way around the world in which relatively few perished—a sad effect of the widespread violence going on in their own neck of the woods.

The report isn’t all bad news for the American PR image though. “U.S. science and tech research is highly valued and you see that in their tweets,” says Romney.

Interest in American research may prove to be useful to the Arab world. Studies predict that they will begin to suffer from similar rates of diabetes and high blood pressure that the U.S. is grappling with, thanks to their increasingly western lifestyles.

The percentage of positively phrased tweets also increased tenfold during Hurricane Sandy, as people in the Middle East expressed sympathy for those affected by the natural disaster.

With the U.S. currently increasing the number of air strikes against Islamic State militants and facilities, Romney says, the sentiment from the Middle East is likely to sour further.

“People will respond negatively to the intervention,” Romney says. “But if we can limit it to air strikes then I think people in the Middle East will recognize it’s not another full scale Iraq war.”

Photo via Dvidshub/Flickr (CC BY 2.0)