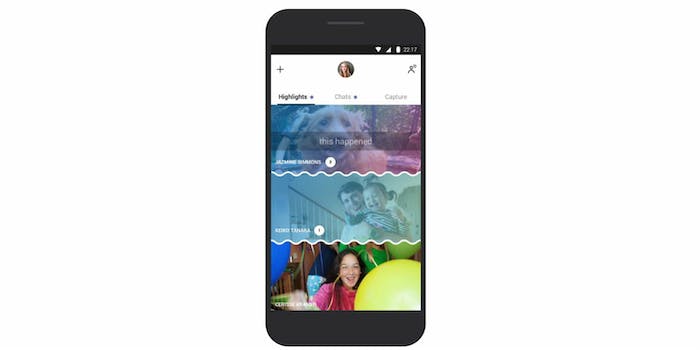 The new 'Highlights' feature is a repackaged Snapchat Stories with a few small changes.

If the consumer tech landscape were a classroom, Snapchat would be the kid everyone wants to cheat from. Facebook and Instagram have already stolen its answers with varying success.

You can now add Microsoft to the list of companies peeking over the shoulder of the ephemeral messaging app. The software giant announced a massive redesign to Skype, including a new “Highlights” feature that lets users create a temporary highlight reel using photos and videos. If that sounds familiar, it’s because Snapchat has been doing the same thing with its Stories feature since it was launched in 2013. At least Microsoft saw fit to name it something other than Stories (really, Facebook?).

Highlights is just one of several features that make up what Skype is calling its biggest change to the platform since it introduced video sharing in 2006. That claim certainly adds some excitement to the release, but it also makes you wonder what it has been up to for the last 11 years.

That being said, the new, cleaner and more colorful redesign is shaping up to be a big step in the right direction for the still-popular video app. A number of functions are more streamlined than the Skype of old. For instance, users can now access their camera with a swipe right, an interaction that has become popular on other social media platforms in the past few years. Once you’ve taken your photo or shot a video clip, you can draw or add stickers to it and then send it to individuals and groups or load it on your highlights.

Microsoft did make some notable tweaks to the Snapchat Stories format. Highlights are available for a week instead of a day, and they are not broadcast to your entire network—only those who follow your posts. The Skype feature also lets users react to Highlights using emoji, similar to Facebook’s implementation.

Another major feature being added to Skype are bots, or virtual assistants, designed to make ordinary tasks easier for you. Microsoft gives the examples of purchasing sports and flight tickets. The company says you can pull pricing and seating options for an event by chatting with a StubHub bot or look at flight options using an Expedia bot. If a bot is integrated in a chat, it is called an add-in.

The Siri-rival Cortana is also making an appearance on Skype. The personal assistant will make suggestions like quick responses in conversations, and a new Scoop feature lets users chat with a bot to get personalized news stories.

Other significant changes will let users add theme colors for apps and react using emoticons in chat. New video features include the ability to play a game with the person on the other end or watch a video together from a streaming service.

Microsoft already started rolling out the major Skype update on Android. It will release it on other platforms, including iOS, Windows, and Mac, in the coming months.