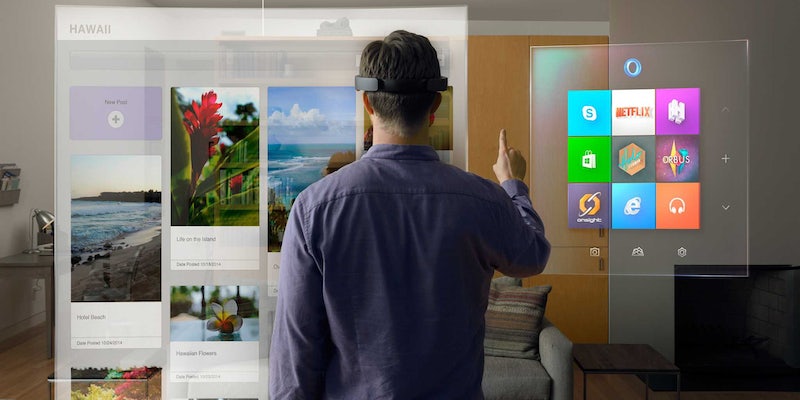 Photo via Microsoft Sweden/Flickr (CC BY 2.0)

Microsoft is mixing it up with mixed reality.

Virtual reality is primarily an individualized experience, but researchers at Microsoft are working on a way to give you a plus-one for your friend on your next trip to a virtual world.

The project, referred to as Comradre (and pronounced “camaraderie”), is a form of augmented VR that can be shared between multiple parties. Microsoft’s HoloLens headset is front and center in the research, which is led by influential computer scientist Jaron Lanier.

A pioneer of virtual and augmented reality, Lanier has been working on popularizing VR since the 1980s. His early efforts presented challenges and resulted in bankruptcy for his company, but in recent years the technology has finally caught up to Lanier’s imagination.

His lab at Microsoft now plays host to a team of student interns working on a variety of projects that pull multiple people into shared virtual experience.

Students from MIT created a system that generates virtual objects that correspond to real life ones, enabling children to play together even when one isn’t wearing a headset. Other researchers have built ways to visualize the otherwise unseeable, such as sound waves and music notes coming from an instrument.

Microsoft showed of the capability of the HoloLens, which was on display at the company’s Windows 10 devices event last week, with footage of a game called Project XRay. The demo showed robots breaking through the wall, requiring the player to move to dodge its attacks while firing back with a holographic weapon equipped on his wrist.

The research projects being performed in Lanier’s lab aim to prove the utility of mixed reality beyond just gaming and entertainment, expanding into the realm of communication and collaboration.

The biggest obstacle for bringing the mixed reality creations into the living room may not be a technical one so much as a practical one; developer kits for the HoloLens will arrive in the first quarter of 2016 with a steep price tag of $3,000.

Until the technology is widely available and more affordable, you and your friends will have to settle for the shared experience of wishing you had a HoloLens.