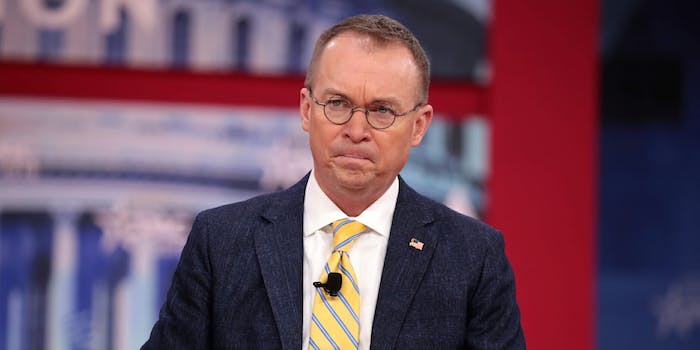 His comments drew some scorn online.

Mick Mulvaney, President Donald Trump‘s budget director, said on Tuesday that when he was a congressman he only met with lobbyists who gave him money.

The former South Carolina congressman made the remarks when speaking at the American Bankers Association conference, according to the New York Times. Mulvaney also serves as the interim director of the Consumer Financial Protection Bureau (CFPB), a consumer watchdog group created as part of the Dodd-Frank Act after the 2008 recession.

The Times reports that the former congressman received $63,000 from payday lenders during his campaigns, a group that he relaxed regulations on early in his tenure as the head of the CFPB.

Mulvaney told the bakers in attendance that they should give more campaign contributions to lawmakers to get more influence.

He also told those in attendance they wanted to weaken the CFPB, a group that he heads after some intense drama.

Mulvaney told bankers yesterday that, as a congressman, he only met with lobbyists who gave him donations.

So, Mick Mulvaney tells the banks to lobby hard for favorable regulations.

And, oh, btw, he only talks to the highest bidding lobbyists.

That would appear to be a direct appeal for naked bribery.

All pretense of honesty and dignity has been abandoned.

Mulvaney would only meet with lobbyists who gave him campaign cash. Now, he's telling banks they have to up the ante to get what they want. The swamp is overflowing, not drained. #theswamphttps://t.co/ZTliNmUyfT

Mulvaney said he would speak to constituents first, regardless of donations.

“If you came from back home and sat in my lobby, I talked to you without exception, regardless of the financial contributions.”