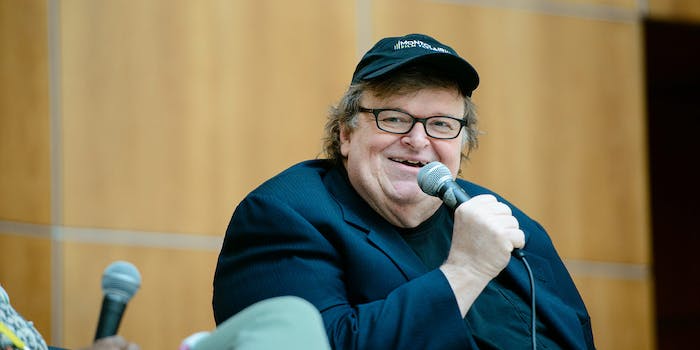 The website has encrypted messaging tools for whistleblowers to leak things to him.

Left-wing documentary filmmaker Michael Moore announced on Tuesday the launch of Trumpileaks, a website that encourages whistleblowers to privately communicate with him.

In an op-ed posted on HuffPost, Moore said he felt compelled to create the website in light of President Donald Trump’s actions since taking the oath of office earlier this year.

“Patriotic Americans in government, law enforcement or the private sector with knowledge of crimes, breaches of public trust and misconduct committed by Donald J. Trump and his associates are needed to blow the whistle in the name of protecting the United States of America from tyranny,” he wrote.

The website offers several ways for people to contact Moore though end-to-end encrypted messaging apps like Signal, Peerio, and WhatsApp, as well as encrypted email options.

“I know this is risky,” Moore wrote. “I [know] we may get in trouble. But too much is at stake to play it safe. And along with the Founding Fathers, I’ve got your back.”

In his op-ed, Moore wrote about several whistleblowers in the past that had made a difference in changing American government and society, adding that Trump “acts like he’s above the law.”

Moore’s website comes amid a growing probe into whether Trump’s campaign had ties to Russia during the presidential election and whether the country interfered in any way in the process.

The ongoing investigation is expected to reach fever-pitch levels later this week when former FBI Director James Comey testifies before Congress—his first public statements since Trump surprisingly fired him as the agency was investigating his campaign.