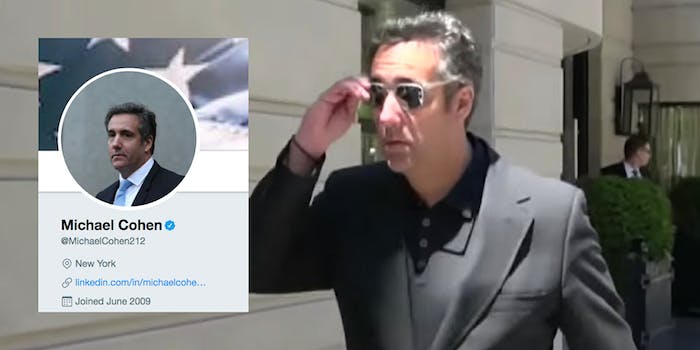 The change comes amid a federal investigation against him.

Cohen’s LinkedIn profile, which is hyperlinked on his Twitter bio, also no longer lists him as Trump’s active attorney. The page says he served as Trump’s lawyer from January 2017 to June 2018.

Cohen had previously expressed undying loyalty to Trump but has increasingly distanced himself from the president. It came to light in recent months that Cohen paid Stormy Daniels $130,000 in hush money over an alleged affair with Trump, though both men previously denied the payment.

Now, Cohen is under investigation for wire fraud, bank fraud, and violations of campaign finance laws. The FBI raided Cohen’s home and office in April, finding evidence that he accepted money from companies who wanted access to the Trump administration.

Last month, reports confirmed Cohen no longer has a lawyer of his own, a probable sign that he is willing to cooperate with prosecutors. Cohen reportedly told friends in mid-June that he expected to be arrested anytime now.