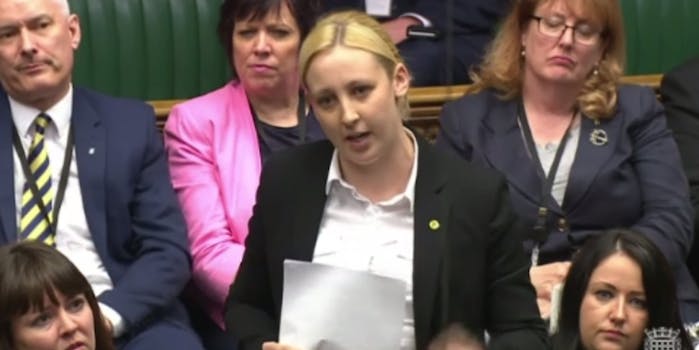 The U.K. is going wild for this heartfelt speech from its youngest lawmaker

Black is a member of the Scottish National Party, which opposes the austerity policies favored by many governments across Europe. In her maiden speech, she spoke out against the Conservative government’s harsh cost-cutting measures, which are set to restrict public funding for many vulnerable people across the United Kingdom.

As Britain’s youngest lawmaker in over a century, Mhairi Black entered office with an unusually high profile for a newly elected MP. But even that couldn’t account for the massive response to this speech, which has been viewed more than 10 million times across multiple platforms.

In particular, she criticized the decision to scrap guaranteed housing welfare for people aged 18-21, which the homeless youth charity Centrepoint described as “disastrous.”

“My housing is subsidised by the state,” said Black, “but in this [government’s] budget the chancellor abolished any housing benefit for anyone under the age of 21. We are now in the ridiculous situation whereby, because I am an MP, not only am I the youngest, but I am also the only 20-year-old in the whole of the U.K. whom the chancellor is prepared to help with housing.”

With most high-profile U.K. politicians still publicly supporting austerity, many people felt this speech was a breath of fresh air. And yes, there are already some Sheppard Fairey-style Mhairi Black macros on Twitter.