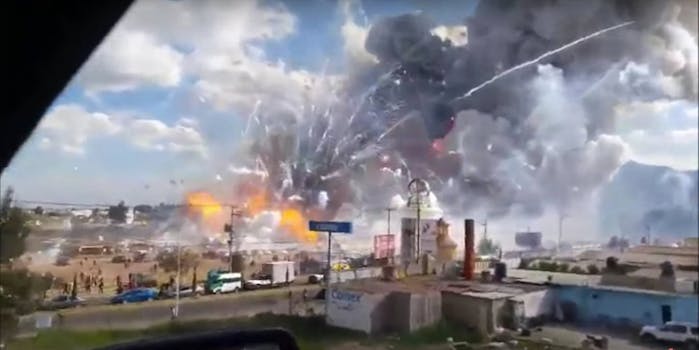 The cause is still under investigation.

A fireworks market just north of Mexico City, Mexico, exploded on Tuesday, leaving 31 people dead, 72 injured, and 100 missing. The explosion occurred around 3pm at the San Pablito market, 25 miles north of the capital city in Tultepec, a town of 40,000 known for its pyrotechnics industry.

According to international newspaper El País, the explosion lasted for more than an hour, and the cause of the blast is still under investigation. After the explosion, emergency crews doused hotspots and transported victims to hospitals, while tents set up outside the market assisted the families and friends of the victims.

This isn’t a first for San Pablito. On the night before Mexican independence day celebrations in 2005, the market caught fire and injured 128 vendors, according to the Guardian. At the time, officials said the explosion was caused by customers who had been given permission to ignite explosives inside. That same year, rocket explosions killed three people and injured 13, according to El País.

The market reopened the following year with updated safety precautions, specifically regarding the structure of the building, the restriction of fireworks beneath glass, and limits on fireworks purchases per person. El País reported that the fireworks market, one of the largest in Mexico, complied with those safety regulations. The aisles were wide and built with fireproof rock, and smoking inside the market was prohibited.

However, a firefighter told El País that market vendors still didn’t always prevent people from trying out the wicks on fireworks.