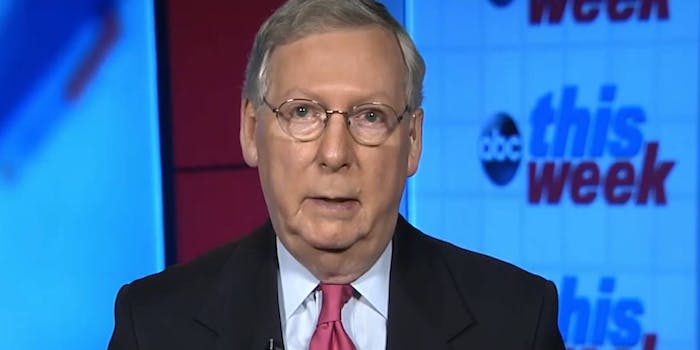 The Senate majority leader was oddly quiet about Trump's qualifications.

On Sunday morning, Senate Majority Leader Mitch McConnell took to the airwaves to perform the same task that countless Republicans have tried, and seemingly failed at, in recent weeks: polishing up the candidacy of presumptive Republican nominee Donald Trump.

At this point, elected Republicans who’re dedicated to party unity are left with few credible ways to distance themselves. Ignoring and refusing to comment on the party’s standard-bearer is simply not a tenable position with months of a general election still to come. As such, many of them are facing some very awkward, nationally televised interviews.

McConnell’s sit-down on ABC’s This Week was no exception. Perhaps the most fundamental question a party leader should be able to answer about their candidate―indeed, should and must be able to answer―is whether they’re qualified to hold the country’s highest office.

And that’s exactly what George Stephanopoulos pressed McConnell on, citing a poll that found that 68 percent of Americans believe Trump to be unqualified, and asking the Kentucky senator where he stood: “Do you believe he’s qualified? And how do you convince all the voters who think he isn’t?” Here’s how McConnell responded:

Well look, I think there’s no question that he’s made a number of mistakes over the past few weeks. I think they’re beginning to right the ship, it’s a long time until November. And the burden obviously will be on him to convince people that he can handle this job. And I think a good step in the right direction was the changes he made in the campaign. He’s beginning to use a prepared script more often, which I think is absolutely appropriate for any candidate, whether you’re a longtime politician like Hillary Clinton, or whether you’re new to the game like Donald Trump.

When Stephanopoulos followed up, pointing out that McConnell hadn’t answered the question, the majority leader dropped a line that a lot of Republicans could be resorting to for the next several months.

.@SenateMajLdr McConnell on whether Trump is qualified to be president: That's "up to the American people to decide" https://t.co/t3s5i2bnvX

Needless to say, that’s not a very reassuring pitch. If anything, it erodes confidence in the presumptive GOP nominee. McConnell’s obvious reluctance to engage with the question lays his and his party’s predicament very bare.

McConnell also touched on another Trump-proximate issue: the stunning Brexit vote in the U.K. Trump’s response to the vote, a rambling endorsement delivered while talking up one of his golf courses in Scotland, in which he falsely claimed the Scottish people were happy about the outcome, drew some sharp criticism this week.

Stephanopoulos first asked McConnell whether he agreed with how Trump handled the Brexit news, and it again became clear that he wanted nothing to do with the question. To the contrary, he ducked it entirely, saying “I’ll tell you who had a really bad week was President Obama.” He then pivoted into a mild attack on Obama’s 2012 campaign manager Jim Messina, who helped run Britain’s defeated Remain campaign, and Stephanopoulos didn’t press him any further on the Trump angle.

Stephanopoulos did, however, ask McConnell whether he personally agreed with the British public on withdrawing from the European Union, and in doing so, he drew out a very familiar response: “I’ll leave that to the British people to decide.”

The tired refrain does little to hide the difficulties the Republican party faces at it heads towards its national convention. If you’re ever playing poker with Mitch McConnell, ask him if he’s got a good hand. If he says “I’ll leave that to the dealer to decide,” go all-in.