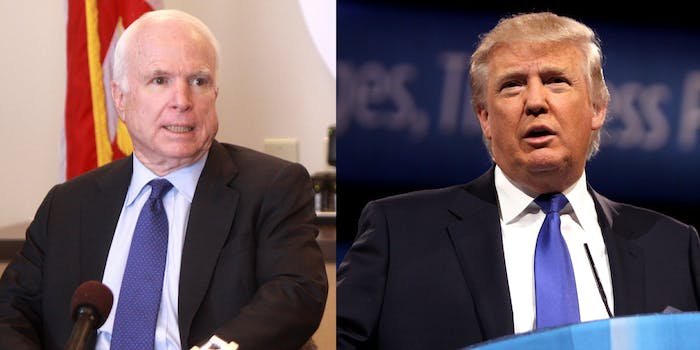 Trump received five deferments from the Vietnam draft, including one from a doctor who said he had a bone spur that disqualified him from military service—something McCain painted as an excuse enjoyed by wealthy Americans.

“One aspect of the conflict, by the way, that I will never ever countenance is that we drafted the lowest income level of America and the highest income level found a doctor that would say they had a bone spur,” McCain said during an interview about the Vietnam War with C-SPAN3, American History TV, which aired on Sunday night. “That is wrong. That is wrong. If we are going to ask every American to serve, every American should serve.”

Trump has long clashed with McCain, who served as a naval aviator before his plane crashed in 1967 and he was captured, tortured, and held as a prisoner of war for five years.

The tensions between McCain and Trump began during the 2016 presidential campaign when Trump said he was “not a war hero.”

“He’s not a war hero. He’s a war hero because he was captured? I like people who weren’t captured,” Trump said.

Since then, McCain has become a thorn in Trump’s side, repeatedly criticizing the president and thwarting his plan for Republican lawmakers to repeal and replace the Affordable Care Act.

McCain’s comments come amid an ongoing controversy Trump helped create by falsely claiming that past presidents did not call the families of fallen soldiers. The president’s off-the-cuff remark at a press conference on Oct. 16 came in response to questions from the press regarding the deaths of four American soldiers during an ambush in Niger earlier this month.

Since then, the family of Army Sgt. La David Johnson, one of the four soldiers killed in the attack reportedly carried out by militants associated with the so-called Islamic State, claimed Trump told Johnson’s widow that “he knew what he signed up for.”