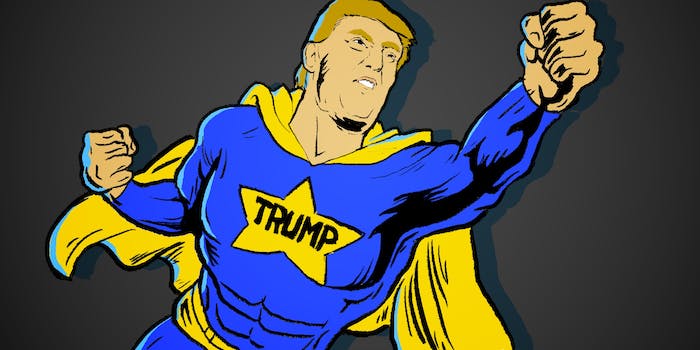 Fans are having mixed reactions.

The comic book world just got dunked into the messy vat of the 2016 election.

Trump skipped last night’s GOP debate, and instead held a fundraiser for veterans in Iowa. All of the money donated goes to Trump’s nonprofit, the Donald J. Trump Foundation, not directly to veteran groups. The fundraiser’s website, donaldtrumpforvets.com, says that “100 percent of your donations will go directly to veterans needs.”

Perlumutter’s outing as a Trump supporter, revealed by the Hollywood Reporter, drew mixed reactions from fans.

You should not not give a cent to anything @Marvel until their racist, Trump-supporting CEO steps down.

The CEO of Marvel just gave Trump a million dollars.

Excuse me while I go burn everything I own of theirs.

Perlmutter’s wife, Laura Perlmutter, has previously donated $2 million to Conservative Solutions, a Super PAC backing Sen. Marco Rubio’s (R-Fla.) bid for president. In a statement provided to the Hollywood Reporter, a representative for the Perlmutter’s said, “The Perlmutter’s are thrilled to support their friend Donald Trump in his efforts to help veterans.”

Even though Trump wasn’t present at the Fox News debate, he still dominated the discussion online, remaining the top searched GOP candidate in all 50 states.

Trump claims the fundraiser garnered $6 million in donations on Thursday night, and the fundraiser’s website claims that $640,000 has been donated directly online.

An unbelievable night in Iowa with our great Veterans! We raised $6,000,000.00 while the politicians talked! #GOPDebate

However, reporters have noted that the public will not know how the funds are distributed or which organizations receive the funds until the Donald J. Trump foundation makes those numbers public, which it is under no legal obligation to do for another two years.

A point about Trump's donations: we won't know if or how much Trump actually gives until the Trump Foundation releases its 2016 990

So unless these veterans organizations individually confirm receipt of Trump's donation, we have to just take his word for it for now.