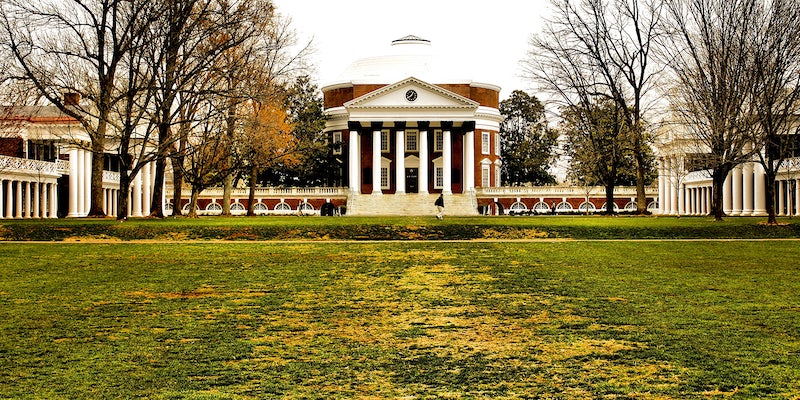 'Today, we are reminded of the gruesome reality that we are not immune to injustice.'

An African-American student at the University of Virginia named Martese Johnson was reportedly left bloody by police after attempting to enter a bar using a fake ID on Tuesday night by officers from the state’s Department of Alcoholic Beverage Control. The incident occurred in front of Trinity Irish Pub, directly across the street from campus.

Images from the aftermath of the beating quickly circulated on social media by the following afternoon.

I stand with Martese Johnson. There is no excuse for this. @VirginiaABC you should be ashamed. pic.twitter.com/4j3bnfDlBI

As did a video of Johnson’s arrest published to the YouTube channel of the university’s student newspaper, the Cavalier Daily.

A statement sent out by a group of “concerned black students” and posted on the Facebook page of the UVA Black Student Alliance reads, in part:

Today, we are reminded of the gruesome reality that we are not immune to injustice; as University students, we are not impervious to the brutality that has reeled on news cycles around the country. We have marched and shouted that we are Trayvon Martin and Michael Brown, but the proximity of this morning’s brutality to a member of our community has deepened that wound. It is no longer happening only on national television—it is a reality here and now at the University of Virginia that we must face as a collective.
…
We demand there be a swift and thorough investigation on the state, local, and University levels. We have seen what happens at the University when we allow problems we have long known exist to be handled quietly, so we will not be quiet. We demand noise from each other, noise from professors, noise from administrators. Martese, like any other student at this university, like any other person in this country and in this world, deserves more than our uproar: he deserves follow through and intentional action.

The statement adds that after Johnson was denied entry into the bar, he was violently thrown to the ground by the officers, who pinned him there while he was bleeding profusely. The statement insists that not only was Johnson’s violent treatment at the hands of law enforcement officials unprovoked, but police on the scene “handcuffed and threatened with possible arrest” other individuals on the scene who pleaded with them to let Johnson up.

The Daily reports that Johnson was charged with resting arrest, “obstructing justice without threats of force,” as well as public intoxication and swearing. Notably, possession of a fake ID was not on that list.

A third-year student at UVA, Johnson is a member of the Honor Committee, which administers the school’s honor code for issues like cheating, as well as the Kappa Alpha Psi fraternity.

Virginia Governor Terry McAuliffe has called for the Virginia State Police to open an investigation into the arrest. “Governor McAuliffe is concerned by the reports of this incident and has asked the Secretary of Public Safety to initiate an independent Virginia State Police investigation into the use of force in this matter,” McAuliffe spokesman Bryan Coy said in a statement. “The Governor’s office has been in contact with University of Virginia President Teresa Sullivan and local law enforcement and will continue to monitor this situation closely as the investigation proceeds.”

For her part, Sullivan issued the following statement on behalf of UVA:

I write to express my deep concern about an incident that occurred on The Corner early this morning and to provide information about immediate steps that I have taken in response.

At about 12:45 a.m., one of our students was injured while Virginia Alcoholic Beverage Control (ABC) agents were attempting to take him into custody on the sidewalk in front of Trinity Irish Pub. University Police and Charlottesville Police arrived on the scene shortly after the incident occurred. We have not yet clarified all of the details surrounding this event, but we are seeking to do so as quickly as possible.

This morning I met with Charlottesville Police Chief Tim Longo and University Police Chief Mike Gibson in an effort to learn more about the incident. Furthermore, because ABC is a state agency, I contacted the Governor’s office to ask for an independent investigation of the incident. In response, the Governor has asked the Secretary of Public Safety to initiate an independent Virginia State Police investigation into the use of force in this matter.

As the investigation unfolds, eyewitnesses will play an essential role in shedding light on the details of this incident. I urge students and other members of our community who witnessed the incident or have other direct knowledge of it to come forward. Please contact the Virginia State Police at 804-674-2000 immediately.

The safety and security of our students will always be my primary concern, and every member of our community should feel safe from the threat of bodily harm and other forms of violence. Today, as U.Va. students, faculty, and staff who share a set of deeply held values, we stand unified in our commitment to seeking the truth about this incident. And we stand united in our belief that equal treatment and equal justice are among our fundamental rights under the law.

While monitoring licensed establishments on University Avenue in the City of Charlottesville, uniformed Virginia ABC special agents arrested a 20-year-old male early on the morning of March 18.

The individual was charged with Public Intoxication and Obstruction of Justice in an incident that occurred at approximately 12:45 a.m. on March 18 in the 1500 block of University Avenue. The uniformed ABC Agents observed and approached the individual after he was refused entry to a licensed establishment. A determination was made by the agents to further detain the individual based on their observations and further questioning.

In the course of an arrest being made, the arrested individual sustained injuries. The individual received treatment for his injuries at a local hospital and was released.

Governor McAuliffe has requested that Virginia State Police conduct an independent investigation into the circumstances of the arrest, including use of force. Virginia ABC will provide whatever information or assistance is requested by Virginia State Police.
Virginia ABC is restricting the Special Agents involved in the incident to administrative duties while the investigation is underway.

This incident is the not the first time officers from the agency have sparked controversy with their aggressive treatment of a UVA student. In 2013, a 20-year-old female undergraduate spent a night in jail after plainclothes officers mistook a bottle of water she was carrying for beer and pointed a gun in her face. Not knowing they were police, the student fled and was charged with three felonies that were quickly dropped after the story made the news.