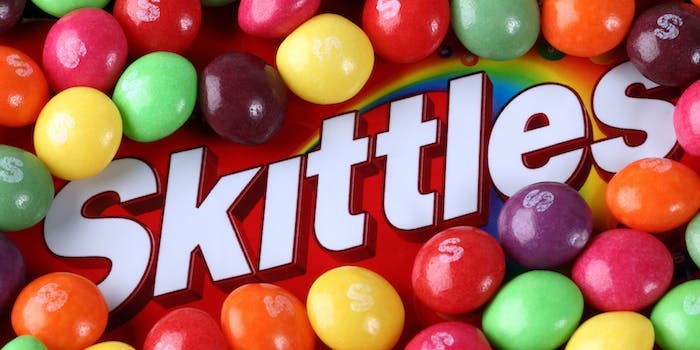 Anti-Breitbart activists count this as a sweet victory.

Candy titan Mars Global has decided to block its ads from appearing on far-right news giant Breitbart, a move an online campaign aimed at eliminating the news organization counts as a major win.

Anti-Breitbart group Sleeping Giants tweeted on Thursday that the confectioner giant has blocked Breitbart from their ad buy, including brands of popular candies like Skittles, Snickers, Three Musketeers, Twix, and more. More than 1,420 companies have blocked their advertising from the far-right news giant as of March 6, according to the group’s count.

Mars confirmed to the Daily Dot that it will not run ads on Breitbart. The company says it has done the same for other “specific types of content, including politics/news-related content.”

“As with many advertisers, for a number of years, Mars Inc. has consistently refrained from running our advertising on specific types of content, including politics/news-related content,” a Mars spokeswoman said in an email. “This is one of many sites where we do not advertise.”

More than 1,420 companies have blocked their advertising from Breitbart as of March 6, according to the group’s spreadsheet of participating companies. If you do the math using figures Sleeping Giants released in February, that means nearly 300 companies have joined the ban on Breitbart in the past month alone.

Mars is one of the largest food companies in the world and is currently ranked by Forbes as the seventh largest company in the United States.

THIS IS GIANT! @MarsGlobal has blocked Breitbart from their media buy. All brands. Stand by for a ton of confirmations!

Sleeping Giants and their supporters will likely see it as a good sign that a company the size of Mars has decided to pull their advertising from Breitbart, a news organization that was once run by White House chief strategist Steve Bannon and is regularly criticized for churning out the type of racist, misogynist, anti-immigrant, anti-Semitic, and Islamophobic commentary guaranteed to go viral amongst the alt-right. Breitbart has been granted exclusive access to President Donald Trump multiple times, an honor that President Barack Obama also gave to different left-leaning news organizations in the past.

Although Mars may have turned its nose up at Breitbart, it hasn’t resisted the temptation of getting exclusive access to the White House. As the Washington Post noted on Tuesday, the lobbying group that represents Mars, Hershey, and other popular candy groups is aggressively courting the Trump administration in an effort to rollback government sugar subsidies.

The National Confectioner’s Association held a gathering of nearly 600 attendees at a Trump resort in Miami and will hold two conferences at the Trump International Hotel in D.C.