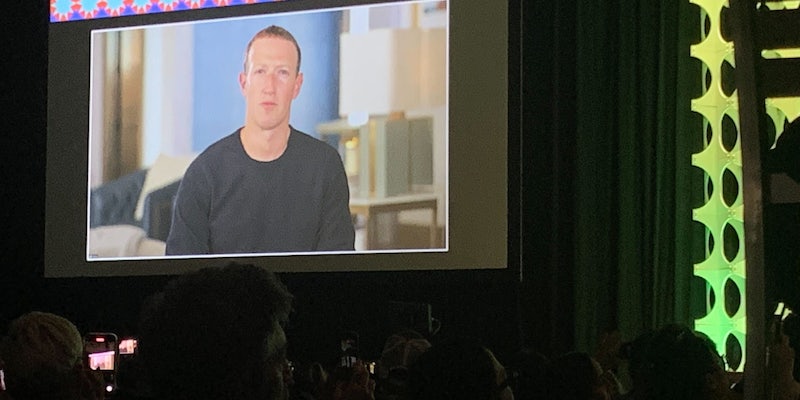 He said Meta is working to help Ukraine.

It wouldn’t be a Mark Zuckerberg event without a little awkward silence, would it?

Calling in remotely from what appeared to be his home, Zuckerberg encountered a bit of a lag when beginning his conversation with Shark Tank host and entrepreneur Daymond John. The featured session on Tuesday was a discussion about how the metaverse and Web3 could “level the playing field” and further “democratize” the creator economy beyond what social media companies like Meta have allowed through their platforms.

Before diving into all of this, however, Zuckerberg took a moment to acknowledge the ongoing invasion of Ukraine. In his first public comments on the matter, Zuckerberg called the invasion a “massively destabilizing world event” and said Meta is working to ensure that its services are available in the country at this time.

“I just wanted to mention it up front and just share my support for everyone in Ukraine,” he said. “I know it’s a bit weird to have a conversation about the future and the metaverse and Web3 and all these exciting things with everything else going on.”

In line with the futurist internet optimism of the rest of the conference, Zuckerberg declared the metaverse the clear “next chapter of the internet.” He praised the immersive nature of virtual and augmented reality and promoted the importance of a more realistic digital presence, following the past two years connecting with others via flat 2D screens.

“In a lot of ways [the metaverse] is like a holy grail of the types of social experiences that I and a lot of people at Meta have wanted to build for a long time,” Zuckerberg said. “And now the technology is starting to get to the point where it’s possible.”

Zuckerberg and John also heralded the new potentials for creators in the metaverse. Zuckerberg proposed the idea of a thriving virtual economy powered by creators who would, among other things, make wares and goods for our digital avatar selves. The two speakers also believed that the metaverse and subsequent technology could allow marginalized creators to access opportunities regardless of where they live.

Zuckerberg discussed Meta’s push into Web3 and the metaverse, even mentioning bringing NFT minting to Instagram (although he wasn’t ready to announce the details). He acknowledged the various problems with current VR, AR, and back-end computing technology that limit usage of the metaverse. However, he expressed excitement about developing better hardware that addresses these problems in the near future. He believes we’re a few years away from better immersive tech.

“I think a lot more stuff will become clearer hopefully over the next couple of years as more of it gets built,” he said.