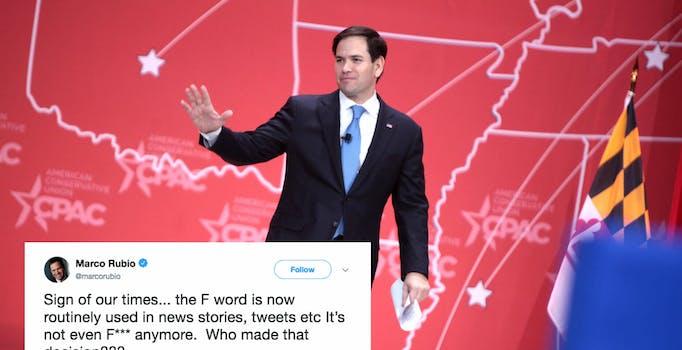 Yesterday, five journalists were gunned down in a newsroom in Annapolis, Maryland. Less than 24 hours later, Sen. Marco Rubio (R-Fl.) offered his own take.

Sign of our times… the F word is now routinely used in news stories, tweets etc It’s not even F*** anymore. Who made that decision???

Rubio’s words also come amidst a nationwide discussion on civility, and he’s right: Fuck is used a lot more now—especially on Twitter, which provides an outlet for people to immediately react to news and share their feelings without censorship.

The news landscape, in general, has also changed, given that it’s covered President Trump’s reported comments about “shithole” countries and the Access Hollywood tape in which he admits to grabbing a woman by the “pussy” and advancing on a woman like “bitch.”

Rubio, who did not tweet any condolences after the shooting at the Capital Gazette, is arguing against a First Amendment right, and everyone on Twitter let him know exactly what they thought of his tweet. One word, in particular, kept cropping up.

Dear Senator Marco Rubio: I agree with you that using the F word without asterisks should not be routine.

But perhaps you should be concerned about the F*cking evil situation of thousands of children ripped away from their parents by our government. Who made that decision??? https://t.co/Ae2xKQgX8N

Fuck off with your fake outrage, you spineless weasel.

I mean, we separate children as young as 3 months old from their mothers, but we cannot lower ourselves to say the cusses on the TV.

And if you're referring to the reporter who had just survived a mass shooting, FUCK YOU!

What the fuck did he think was gonna happen?