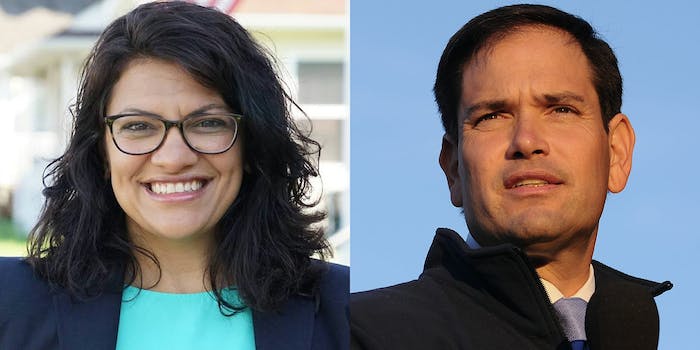 It's the second time in days Republicans are mad she's speaking her mind.

If there’s been one hallmark of the incoming crop of Democratic representatives, it’s been their willingness to speak vocally on issues they care about. And it’s caused tweets of panic and consternation among long-serving members unaccustomed to the behavior.

While the government shutdown enters its 17th day, a group of Republicans introduced a bill, their first bill of the new Congress. And a provision in it is aimed at the Boycott, Divestment, and Sanctions movement (BDS), which tries to get businesses to cut ties with Israel, over its treatment of Palestine.

As part of the bill, a provision put forth by Rubio would protect the government for refusing to work with businesses who participate in BDS. In a tweet, Tlaib criticized the Senate for considering the bill, calling boycotts “part of our historical fight for freedom.”

They forgot what country they represent. This is the U.S. where boycotting is a right & part of our historical fight for freedom & equality. Maybe a refresher on our U.S. Constitution is in order, then get back to opening up our government instead of taking our rights away. https://t.co/KkmqjR58ZM

To which, Rubio said Tlaib used anti-Semitic language by making an accusation that Jews in America are more loyal to Israel than they are to America.

Tlaib, who is Palestinian, responded to Rubio’s accusation, saying she was criticizing U.S. senators, and nothing else. The “they” in her tweet referenced the job to “represent” and “getting back to opening our government,” making her case pretty straightforward.

Sen. Rubio, it's clear my earlier tweet was critical of U.S. Senators like yourself, who are seeking to strip Americans of their Constitutional right to free speech. https://t.co/xFn2XeCqsZ

Rubio, for his part, was accused of not understanding the Constitution.

How does a sitting US Senator lack such a basic understanding of the constitution? Individuals can boycott whom/what ever they like. But the govt (state or fed) cannot penalize individuals on the basis of their political beliefs. https://t.co/o8wvE9eyJK

In a statement, the Anti-Defamation League said that regardless of whether Tlaib meant her language to be offensive, the way she phrased it was “deeply problematic.”

“Representative Tlaib’s tweet regarding the pending bill on the Senate floor has been interpreted by some as suggesting that Jews or Members of Congress, such as the sponsors of the bill, are more loyal to Israel than to their own country. Whether or not this was her intent, this type of language is deeply problematic.”

Intentional or not, this could be interpreted as offensively insinuating dual loyalty – a trope with a long & troubling history. It's possible to engage in the democratic process w/o claiming the other side is disloyal. We asked @RashidaTlaib to clarify: https://t.co/KzpN84THYj https://t.co/HLsfm3b7WV

This is the second time in a week Tlaib has found herself under fire for her language. The night after she took office, Tlaib was filmed saying about Trump, “We’re going to impeach the motherfucker.”