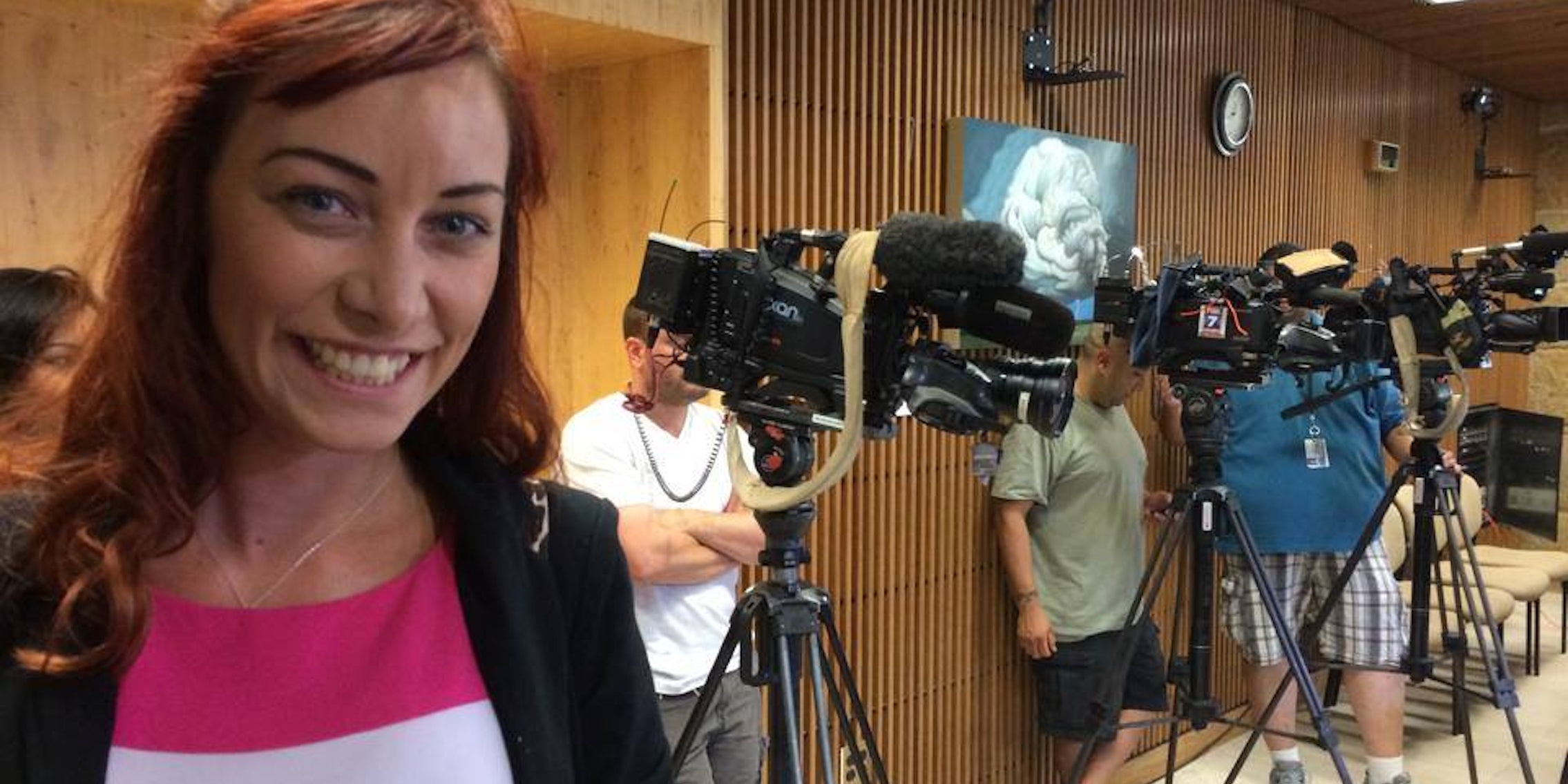 "I play games. I play video games. I want to see the right things done."

On the eve of Election Day, Austin City Council District 6 Republican candidate Mackenzie Kelly is in the trenches.

A mailer from rival Matt Stillwell painted Kelly as too green to be taken seriously. It’s not good—but it’s a sign that she’s on the radar. She’s vigorously tweeting, conducting Q&A forums, and—as politicians do—beating the drum for her cause with hopes of rallying the base. The curious thing is, Kelly’s most famous cause exists independently of her district’s political outlook.

Her cause is Gamergate.

In the off chance you stayed offline for the past two months, and have no idea what we’re talking about: Gamergate is generally described as an online movement whose members, at best, call for improving “ethics in gaming journalism” (a phrase that quickly became its own meme). At Gamergate’s worst—and most high-profile—people identifying with its community send rape and death threats to prominent women in gaming, a fact that Kelly brushes aside with the ease of, well, a politician.

A volunteer firefighter, natural disaster-planning expert, and professional model, 28-year-old Kelly has emerged as one of Gamergate’s most public and passionate defenders. Her tweets have shifted almost exclusively to Gamergate causes, and she’s become popular enough to host a successful Reddit Ask Me Anything (AMA) interview.

Get your #GamerGate Facts straight. pic.twitter.com/widhxBJUSR

Get your #GamerGate facts straight. pic.twitter.com/yoM2Cfh7Zy

Kelly’s involvement with Gamergate began after one of her Twitter followers noticed that she liked video games and prodded her for a public stance on Gamergate. It got her curious enough to brush up. After reading a few fan-curated news reports, Kelly was in.

“Wow, there is a whole community of gamers that, like, believes ethics in gaming journalism need to change, and this is the reason why [I got involved],” she tells the Daily Dot.

Gamergate is, if nothing else, a curious thing for a politician to latch onto. At this point, Gamergate’s news cycle is barreling toward its logical end—media exhaustion coupled with a lack of newsworthy stories will likely soon lead to aggressive indifference. Add that to the probability that few of Kelly’s constituents—residents of the Northwest Austin, suburb-laden, mostly white and wealthy District 6—likely know what Gamergate is. And if they do, Kelly admits, it’s even less likely that their vote will be influenced by her stance on what, in a broad sense, became a widly out-of-control hashtag.

“I do what I feel is right. And if I do what I feel is right in my heart, and I stick to the facts and the truth of the situation, at least from my point of view, then nothing anybody can say will ever tear me down,” Kelly says. “… No one in Austin is going to vote for me based on how I believe in ethics in gaming journalism. I think I can state how I feel about this and make sure that the right issue is heard.”

“I’m not in this for personal gain,” she adds. “I play games. I play video games. I want to see the right things done.”

The cynical analysis is that Kelly may as well champion Gamergate because she’s not going to represent District 6 anytime soon. Kelly says she raise a grand total of “just under $300,” and had only $1.75 left in her campaign war chest with a week to go before election day. That puts her in sixth out of six candidates, with challenger Jay Wiley having spent over $37,000.

Kelly didn’t enter the election until August. She made the minor error of skipping a required League of Women Voters forum, for which she was called out in Austin’s largest newspaper, the Statesman. Then Kelly dressed in blue body paint as Mystique from the X-Men for a Halloween event, and it made hometown headlines.

By her own admission, Kelly’s candidacy began with an exploratory downtown trip to city hall for the required paperwork. Her decision to run was finalized as she enjoyed iced tea and appetizers, reading over the rules next door at Italian restaurant, Taverna.

“I was at a disadvantage from the start. I got in late. I didn’t raise any money,” Kelly says. “I didn’t raise more than $300. I find it really hard to ask people for money.”

Instead of paying $500 to get on the ballot, she collected 25 signatures from registered voters in her district. Kelly grew up in Austin’s District 6, attending Westwood High School, giving her a base of what amounts to her class-of-2005 high school friends, several parents, and those who know her as a dedicated volunteer firefighter.

“There are other tools available these days to get your name out there,” Kelly says. “I would like to make it to the runoff. But if I don’t, at least I learned from this experience.”

On the Internet, however, Kelly blows the doors off her District 6 competition. Her YouTube channel, mostly littered with fitness videos, has more than 1,300 subscribers. Her 29,000 Twitter followers total more than the Austin Tea Party-backed Jay Wiley, Democrat Jimmy Flannigan, and Democrat Matt Stillwell combined.

According to Kelly, her Twitter boom resulted from her live coverage of the 2011 Bastrop County Complex fire. As a volunteer disaster worker, she’d tweet out firsthand news, and it was such a success that she later landed speaking gigs at “several conferences,” she says.

Gov. Rick Perry appointed Kelly to the Governor’s Committee on People with Disabilities a year later, where she made legislative recommendations about enhancing the 9-1-1 system for the disabled.

Kelly can point to a record of veritable service. Couple her activism with losing a city council election at 28, and you get the makings of a strong future resume. Kelly admits that she has long-term political aspirations.

“I get yelled at by little 12-year-old boys who say they banged my mom last night,” Kelly says of her Call of Duty hobby. “It’s no different than working around a bunch of guys.”

She plays Minecraft “a couple hours” every week, and self-identifies as a gamer. When I bring up feminist video game activist Anita Sarkeesian’s appearance on The Colbert Report, she dismisses Sarkeesian as an outsider: “She couldn’t even name three video games. … That was her Rick Perry moment.”

“There’s no reason not to be proud of being a gamer,” Kelly says. “I’m not in my basement eating Cheetos at my mom’s house. I’m actually, in real life, making a positive influence on society—but I play video games.”

For critics, Kelly’s advocacy for Gamergate recalls the institutional defense of, say, Penn State fans who clung to the school’s football program as the rest of the U.S. foamed at the mouth over news that former coach Jerry Sandusky was a serial child molester. Kelly, on the other hand, dismisses Gamergate’s deeply misogynistic side as a distraction from its “core base values.”

“[Gamergate has] been diluted quite a bit from what its core base value was,” Kelly says. “I still believe that, at the core of it, there’s a group of people who firmly believe that it’s about ethics in journalism.”

“I don’t like the harassment. I don’t like the death threats,” she adds. “We should be having respectful arguments. … But it’s the Internet; there are always going to be trolls.”

Kelly has dealt with tons of trolling herself, she says. She’s had stalkers. She’s been peppered by negative YouTube comments. She doesn’t fear being doxed or hacked, she says, because as a political candidate, many of her personal vitals are already public. With a layer of thick skin and her personal life already out in the open, Kelly says she’s meant to be a public defender of gaming culture. “I play video games, and seeing people do unethical things eats away at me,” she says.

Fact about #GamerGate : as gamers, we stand united in feeling that there needs to be more transparency & less demonizing & name calling.

Fact about #GamerGate : it’s not just straight White Males who are in favor. We are incredibly diverse. #NotYourShield

Kelly says she hates cyberbullying, and is naturally compelled to have the back of gamers derided as basement-dwellers, which has added to her support of Gamergate. Nevermind that as much as 75 percent of the #Gamergate hashtag’s tweets are negative, according to one analysis, and mostly directed at women in gaming.

Above all else, Kelly believes this is a culture that needs a leader—and that she might be the one to take the helm. And she says she’ll do it by taking it back to what she believes lies at Gamergate’s roots: ethics in journalism.

“We recognize that there are ethical issues in journalism,” she says. “And it’s not just one focusing event, and things need to change.”

Photo via Kelly for Austin/Facebook