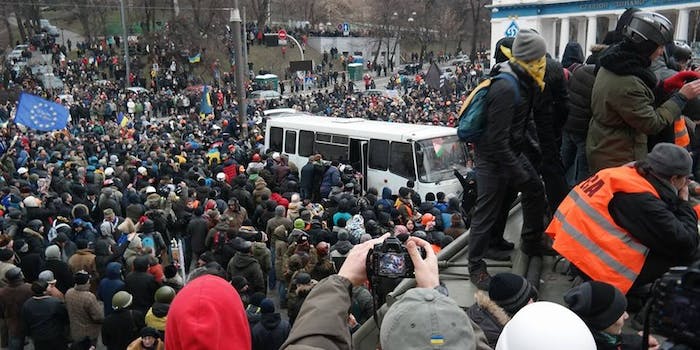 A brave citizen is livestreaming the riots from Kiev, and the footage is at once incredible and horrifying.

The recent, violent turn of ongoing anti-government demonstrations in the Ukrainian capital of Kiev has suddenly made the conflict the subject of banner headlines here in the U.S. But for months now, the protests have been followed intensely by viewers around the globe, watching the drama unfold live online.

Nearly two months before protesters and riot police began to openly clash in the streets—exchanging molotov cocktails, rubber bullets, rocks, and tear gas—a blogger from Kiev has been broadcasting the events live on Ustream garner close to 10 million views.

Since late November, when protesters first assembled in Kiev’s central square to stand against Ukrainian President Viktor Yanukovych’s unpopular decision to dismiss an economic partnership with the European Union in favor of closer ties to Russia, the Ustream account Аронець live has been creating an instantaneous record of the demonstrations seizing the capital city.

In addition to the livestream, Aronets has catalogued hundreds of videos of the protests. For nearly two months, demonstrators have controlled the capital city’s Independence Square, costing the city an estimated $1.75 million. However, that estimate came prior to the sudden burst of rioting that began several days ago when the government passed anti-protest laws last week intended to quell the demonstrations.

For the past three days, the city has seen open violence on the streets that has caused hundreds of injuries to both protesters and police. According to the Associated Press, more than 1,500 activist sought medical attention after Tuesday’s rioting. RT.com reports that police have threatened to use live ammunition if violence spreads out of control.

Some 2,000 people turned out Tuesday to confront riot police attempting to enforce the newly-minted protest ban. Despite heavy snow and freezing temperatures, the protesters managed to hold their positions in Kiev’s government district overnight, even as police attempted to dismantle barricades.

In clips posted by Aronets, the intensity of conflict is apparent. Below, you can see police spray fire house and throw flash bang grenades at protesters.

In other videos, Aronets offer’s a bird’s eye view of Independence Square at night. Demonstrators,  explosions, and gunfire are heard periodically in the distance.

Online videos are a critical tool for protesters around the world. Where once news from geopolitical hotspots could only be transmitted through periodic press reports, now graphic images are available instantaneously from the heart of conflict zones. YouTube videos of a chemical weapons attack in Damascus last year helped bring attention to the ongoing Syrian civil war. That attack nearly drew the United States into armed conflict Syrian President Bashar al-Assad’s regime until a disarmament agreement was negotiated.