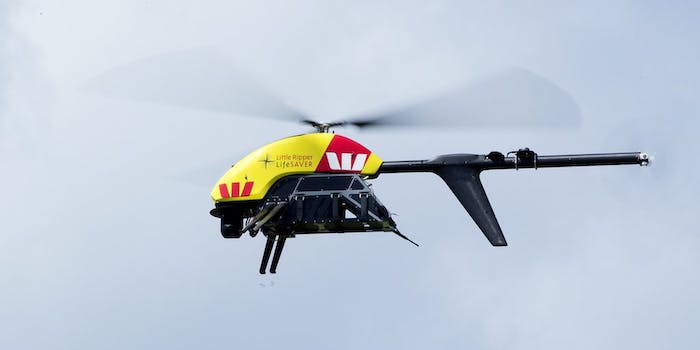 Drones will patrol Australian beaches in search for sharks

In Australia, there’s a problem in the water and the solution is in the sky. The country is launching a trial program that will utilize drones to monitor the shores of New South Wales for shark attacks.

The $250,000 drones, affectionally referred to as Little Rippers, can remain in the air for two and a half hours before requiring a charge. The airborne bots will spend that time capturing live footage of the coastline and broadcasting it to a two-person team that monitors and controls the craft.

If and when something pops up on the radar of the Little Ripper, the drone can release a payload that includes supplies, an inflatable raft, and GPS beacons that will signal the exact location of the person to rescue workers.

For now, the majority of the function for the Little Ripper will be handled by human controllers, but a team of researchers at Sydney’s University of Technology want to craft a digital brain for the rescue vehicle. Specifically, the team wants to equip the Little Ripper with an algorithm that could be used to determine the different types of sharks that it spots below.

The information would prove helpful for rescue workers, as they would have a better idea of what they’re dealing with when attempting to save a victim of a shark attack or prevent one all together. There are several species of sharks cruising the waters of Australia, including bull sharks, tiger sharks and great white, which also happen to be the three species responsible for most attacks on humans.

With the knowledge of what type of sharks are in the water at any given time, lifeguards and emergency services could clear out areas of the water to avoid any potential problems.

According to the researchers at Sydney’s Taronga Conservation Society, there have been 1003 shark attacks in Australia since record keeping began began in 1791—232 of those attacks have been fatal. Last year, there were 15 attacks and one fatality in New South Wales, where Little Ripper will first be used.

For now, the Little Ripper program is just a test run that will last for six months. If it’s successful, nearly 40 of the drones could be provided to Australia’s Surf Life Saving Clubs next year.