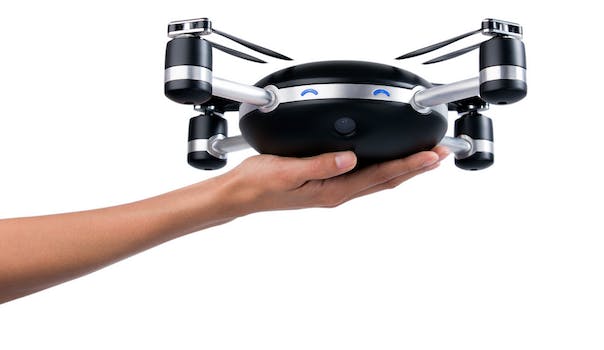 This selfie drone will stalk you, and you’ll probably love it

It was supposed to be like hiring a personal flying photographer.

As soon as adorable flying drones got the ability to shoot photos and video, it was only a matter of time before humanity decided they were the perfect tools for one-of-a-kind selfies. But Lily is different. It’s not just an agile little quadcopter that can take your picture: It’s a drone that is built to do nothing but follow you around and film or photograph your every move.

Lily’s creators are all about simplicity, and the company’s site notes that there are only three steps to actually using the gadget: Turn it on, throw it, and then do whatever you want while the airborne camera does the hard work for you. All you have to do is carry around a small tracking device so that Lily knows where you are.

You can tweak the drone’s habits, having it follow behind, in front, above, or along your side, and those movements can be altered with buttons on the tracking device, so you don’t have to stop shooting to change up the angles. A flight can last up to 20 minutes, which is about average for a drone of this size.

If you demand the most high-tech selfie technology on the market, you can pre-order Lily for $499, which is half off the $999 price tag that the company plans to charge at retail.

Update 1:30pm CT, Jan. 12, 2017: After a year and a half, $34 million in pre-order funding, and a $14 million round of series A funding, the Lily drone is no more. Techcrunch reports that the startup is calling it quits after being unsuccessful in securing another round of funding (one that would have enabled production to start). In an email to backers, Lily said that it would be issuing refunds to its customers.