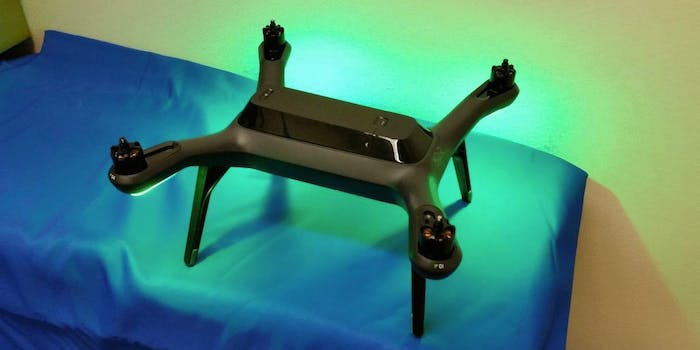 Drones are unmanned, but that doesn't mean their operators should be unaccounted for.

Drones are unmanned, but that doesn’t mean their operators should be unaccounted for. Researchers at the University of California, Berkeley, have proposed a drone identification system that would use flashing lights as a license plate.

Instead of the standard alphanumerical plates that are affixed to cars, drones would be equipped with a set of bright, multicolored LED lights. The lights would flash in a unique sequence that would correlate to the owner. A smartphone app would identify the pattern and search the database for the operator the vehicle is registered to.

The proposal, called LightCense, would force drones to announce their presence to anyone in the vicinity of it as well as give law enforcement a means of looking up a drone owner.

“If somebody wants to complain or trace back the drone operator contact, [they] just send a request to the part responsible for the drones (FAA, or local authorities) and get the information,” LightCense inventor Aislan Foina told the Daily Dot. “The law enforcement can use the LightCense to check the drone registry to control if the drone is allowed to fly in the city, if it is licensed, or even if the license is still valid.”

As drones become more popular and remain largely unregulated, more examples that prove the potential value of a drone ID system arise. In Southern California, drones interfered with firefighting helicopters as they attempted to stop a wildfire from spreading across a highway. The state of California is now offering a $75,000 reward to find the operators responsible.

The problem is only likely to increase as drone sales continue to rise. The unmanned aircraft have been positioned as the newest tech consumer toy, with sales estimated to reach nearly 700,000 units this year.

Foina notes that he doesn’t see LightCense as a universal identification system for all unmanned aircraft; it’s focused on the low-flying, potentially invasive vehicles.

“If the drone is flying at 400 feet, 60 miles per hour, the people on the ground will not notice it, so they will not try to identify it. But when the drone is 50 feet hovering over your house, you will notice (and hear it) and the drone must show it self,” he explained. “People will want to know what that drone is doing over their house. So you can easily identify it without any special device, or any technical knowledge.”

Just like the standard license plates on motor vehicles, the LightCense system requires participation from the drone’s operator. The LED lights could easily be obscured or covered to prevent people from identifying it. But in a world where LightCense is standard, a drone without lights is more noticeable than one with them.

The biggest hurdle won’t be willing participation from drone operators, but from lawmakers. LightCense and any other identification system is essentially useless if it’s not standardized and uniformly implemented.

According to a report from the Government Accountability Office (GAO), the Federal Aviation Administration (FAA) is working on programs “seamlessly integrating UAS flight into the national airspace,” noting that the economic benefit of doing so could generate $82.1 billion over the next decade.

Despite the growing urgency to manage the skies, the actual plan making it happen is sparse. The GAO suggests rules might not be in place until late 2016 or early 2017, leaving plenty of time for other countries like Australia, Canada, France, and the United Kingdom to bypass America in airspace regulation.

Within the current proposals, flying unmanned aerial systems would require a government-issued unmanned aircraft operator certificate and a certification process to be approved as a pilot. There is no mention of an identification or license program.

Fiona hopes LightCense will make its way into the conversation as the FAA crafts its rules and regulations for drone operators. He already presented LightCense at the NASA Unmanned Aerial Systems Traffic Management Convention last month, and is in early talks with NASA, FAA, and drone manufactures.

When asked about LightCense or other identification systems, a spokesperson for the FAA told the Daily Dot, “At this time, we don’t have the authority to require new rules on model aircraft/UAS per provisions Congress put into the 2012 FAA reauthorization law.  We do require anyone operating an unmanned aircraft for commercial purposes to register. As Secretary of Transportation Anthony Foxx noted last week, we are exploring what else we can do now and what we may need additional authority to do.”