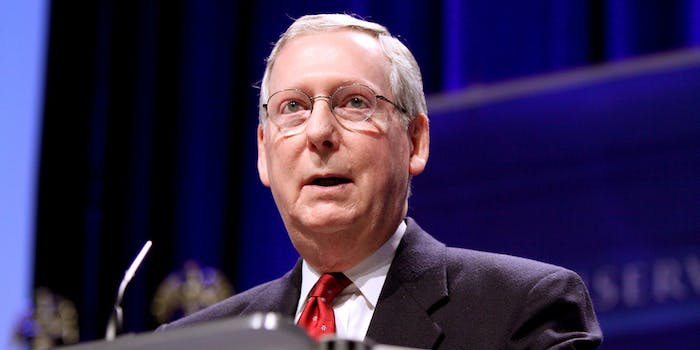 The biggest libertarian groups aren't having any of it.

Senate Majority Leader Mitch McConnell (R-Ky.) wants to renew the USA Patriot Act, the controversial law giving the government sweeping surveillance powers, without any reforms, but libertarian groups are putting him on notice.

A coalition of these groups, including the conservative heavyweights FreedomWorks, the Competitive Enterprise Institute, and TechFreedom, sent a letter on Monday to McConnell and Senate Minority Leader Harry Reid arguing against a “clean” renewal of the Patriot Act.

McConnell introduced S.1035, which would renew the Patriot Act without the reforms included in other bills, on April 21, surprising civil-liberties groups and roiling a congressional surveillance debate that had shown modest signs of progress.

“The Senate has a duty to carefully evaluate existing programs before voting on whether to simply reauthorize them without reforms—especially because lawmakers in 2001 didn’t set out to create a vast surveillance state,” reads the letter, which is signed by 11 libertarian groups.

The letter lays out the groups’ main objections to the Patriot Act in its current form, from the unconstitutionality of blanket surveillance to the decline of trust in U.S. businesses due to bulk data collection.

In recent years, the ballooning cost and scope of the U.S. surveillance state has united progressives and the libertarian wing of the Republican Party in a rare consensus. The Senate’s two fiercest critics of government surveillance overreach, Sen. Ron Wyden (D-Ore.) and Sen. Rand Paul (R-Ky.), disagree on virtually every subject outside of surveillance and related issues like drone policy.

Paul, a 2016 presidential candidate, has surprised and angered civil-liberties groups by refusing to criticize the Patriot Act renewal push by McConnell, his fellow Kentucky senator. When he spoke at a dinner hosted by The Constitution Project in late April, National Journal reported, he “took time to blast the NSA” but “did not mention McConnell or the push for clean reauthorization in front of the friendly crowd.”

McConnell’s office did not respond to multiple requests for comment on the libertarian groups’ letter.