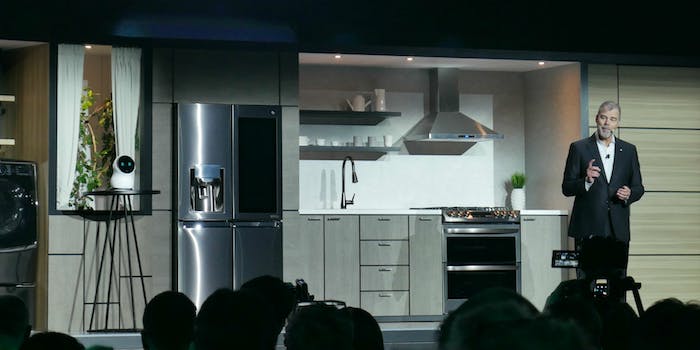 It was showing off a new AI platform.

The robots turned against LG on its most important day of the year.

CLOi, a cute little robot with a striking similarity to last year’s Hub, froze up while the South Korean giant was showing off a new AI platform at its CES 2018 press conference.

Not just once. Three times throughout the keynote, the robot failed to reply to the requests of LG’s vice president of marketing, David VanderWaal.

The robot, much like Amazon Alexa, is designed as a hub for your connected home. It can change your washing machine settings, turn on your TV, or add a recipe to your LCD-equipped refrigerator—a few examples in an endless list of menial tasks. But at the year’s biggest trade show, it did none of those things.

When VanderWaal asked CLOi what he was having for dinner, the little robot got stage fright and remained silent. To his credit, VanderWaal played it off nicely, quickly deflecting with “OK, CLOi is not going to talk to me yet. CLOi doesn’t like me evidently.” While that explanation would be far more terrifying than “this thing just isn’t working,” that’s really not what’s going on here. CLOi isn’t a humanoid bot capable of emotions, it just failed.

Vice’s David Gilbert caught the cringeworthy moment on camera and posted it to Twitter.

There are several potential explanations for this particular blunder: the Wi-Fi could have failed, the mic may not have been good enough, or maybe the room was too loud. But when you’re demonstrating an AI platform with your core AI product, there is no room for error. It’s yet another example of why live demos are so risky. Last year, it was EV hopeful Faraday Future’s FF91 that failed to park itself. In 2016, BrainCo embarrassed itself showing off its brain-scanning headband—the list goes on and on.

Called ThinQ (and pronounced “thin-Q” not “think” like it should be), the platform LG unveiled on Monday lets it add AI to all its smart products so they can be controlled via voice commands and with Google Assistant. Having started off the wrong foot, LG now faces an uphill battle to convince people that its AI platform outperforms the growing competition.