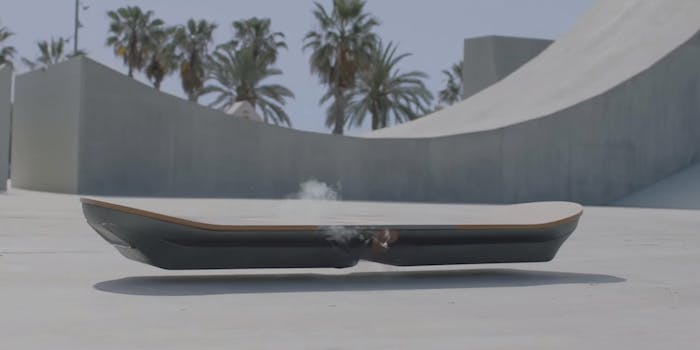 We want this magnetic, liquid nitrogen-powered Lexus hoverboard to be real

But we've been burned before.

Lexus is the latest company to make a convincing video about a hoverboard concept almost certain to go viral. Lexus claims it created a hoverboard powered by magnets, but we’ll have to ride it to believe it.

The company introduced the Slide in a somewhat mysterious video with a skateboarder ditching his mode of transportation and walking up to the hoverboard that’s emitting something that looks like fog.

If the sparse website is to be believed, that fog is actually residue from the liquid nitrogen that’s cooling the superconductors and magnets that allow the board to hover above the ground.

As the Verge points out, magnets are a viable option for creating hoverboards, however this video might not be 100 percent accurate, as in order to lift itself off the ground, there needs to be a magnetic strip providing counter pressure to control the board.

Slide is the latest project from Lexus’s Amazing in Motion series, where the company combines artistic concepts with technology including 3D printing, robotics, and drones to make hardware that’s meant to be appreciated, never owned.

It’s just as likely that Slide is another Lexus concept that most humans don’t get the chance to ride. Perhaps that residue coming off the hoverboard is just the vapor from the vaporware.

H/T the Verge | Photo via LexusInternational/YouTube