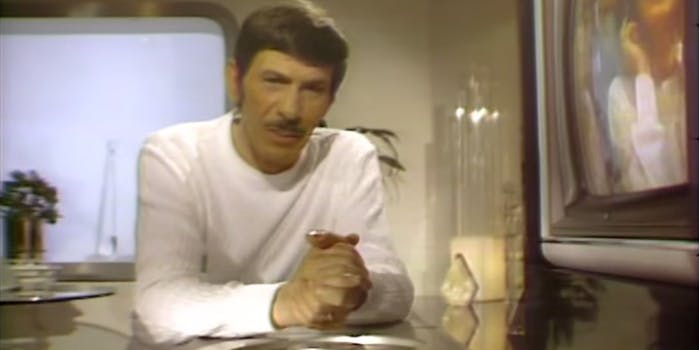 He was the face of future tech.

Advertising in the ’80s wasn’t much different than it is today, which means lots of celebrity endorsements. Following the success of Star Trek, Nimoy was TV’s face of “future tech” and everything he pitched seemed like it was space-age technology. Thanks to the Internet, those wonderful, cheesy ads are preserved for all eternity, so let’s enjoy a brief trip back in time to watch our favorite tech pitchman work his magic.

In an age of smartphones, there’s no reason to consider using a pager, but Nimoy will probably convince you that you need one.

Only Nimoy could convince us that the Oldsmobile Silhouette was akin to the Starship Enterprise.

Teaming up with his Star Trek co-star for a Western Airlines spot in 1985, Nimoy helps sell the line, “Frequent flyers like the future.”

Nimoy was a huge Magnavox spokesperson and teamed up with the brand on a number of occasions to pitch everything from TVs to the Odyssey game console.

But perhaps his most impressive role was this LaserDisc promotional spot that stretched longer than 10 minutes, complete with a mustachioed Nimoy conversing with a glowing, beeping alien crystal. It’s a piece of infomercial history, and Nimoy has the starring role.