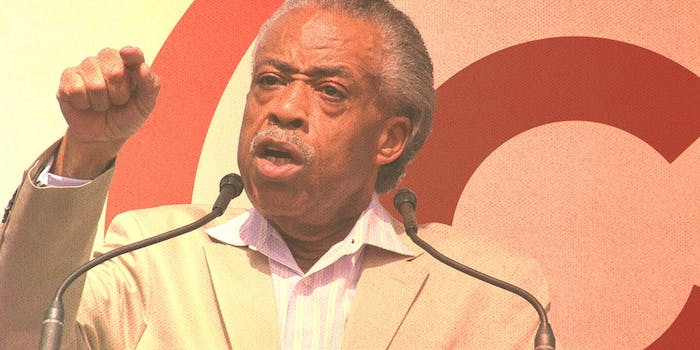 It's almost easier to name who isn't named in this suit.

A $20 billion lawsuit alleges that a huge coalition—including Time Warner Cable, Comcast, the NAACP, Al Sharpton, and the president of a cellphone industry association—have engaged in a massive attempt to discriminate against African-American-owned television.

The accusation comes from Entertainment Studios, which claims it’s the only 100 percent African-American-owned company that both produces and distributes its own video on multiple channels. The company’s claims stem from a Memorandum of Understanding (MOU) Comcast signed in 2010, which included multiple ways the media giant increase its diversity—including contracting producers “in which African-Americans have a majority or substantial ownership interest,” as well as regularly consulting with the National Association for the Advancement of Colored People (NAACP), and the National Action Network (NAN), which Sharpton founded.

And that’s where it gets somewhat confusing. In its suit, Entertainment complains that “the MOUs are a sham, undertaken to whitewash Comcast’s discriminatory business practices.” The MOU primarily pledges to buy from producers heavily owned by African-Americans.

That’s not to say Comcast looks clean in this. Entertainment Studios does note that the company does have a single small contract with the Africa Channel, which is completely African-American owned. The hitch, though, is that channel is majority owned by the family of Paula Madison, NBC’s Chief Diversity Officer, who kept that job when Comcast acquired NBC in 2009 and left in 2011. Similar attempts at diversity in Comcast programming, the suit says, often trace back to white owners of minority-themed programming.

There’s precedent here. Entertainment Studios is joined in the suit by the National Association of African American Owned Media. It’s not clear how distinct the two organizations are: The NAAAOM has only made headlines once before, for representing Entertainment Studios in a similar suit in December, against AT&T and DirecTV for $10 billion. As noted by the Washington Post, NAAAOM’s president, Mark DeVitre, is an executive at Entertainment. NAAAOM didn’t immediately respond to the Daily Dot’s question of how many other clients it represents.

Meanwhile, the suit says, Comcast has paid Sharpton some $3.8 million in “donations.” Sharpton has responded that the allegations are “frivolous” and that he plans to file a countersuit.

Regardless of how the suit is settled, it notes that the proposed merger of Time Warner Cable and Comcast would unite television programming for nearly a third of all Americans—meaning that its attention to diversity would have a substantial impact on what the U.S. watches.

Correction: An earlier version of this article’s headline incorrectly stated the damages sought in the lawsuit, an amount of $20 billion.