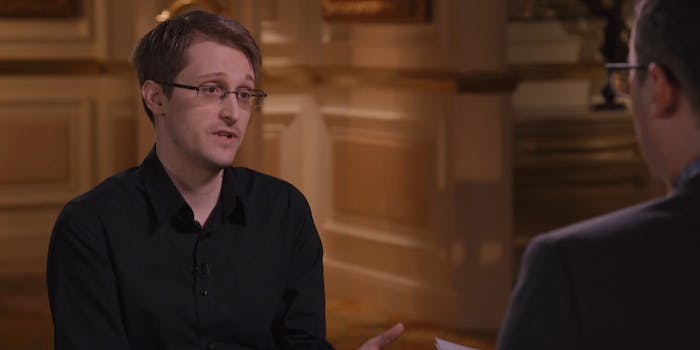 The latest episode of Last Week Tonight featured the definitive explanation of NSA surveillance by tackling the most pressing issue: Can the government spy on your dick pics?

To answer this question, John Oliver traveled to Russia and interviewed the man he called “the most famous hero and/or traitor in recent American history,” Edward Snowden.

A Snowden interview is a rare opportunity for a comedy news show, and Oliver made the most of it with a combination of jokes (“Do you miss Hot Pockets?”) and legitimate questions about the NSA documents Snowden leaked in 2013. Congress is scheduled to renew the Patriot Act on June 1, and Oliver thought it was time to make absolutely sure that Americans knew what they were getting into in terms of continued government surveillance.

Because Last Week Tonight already figured out that most average Americans didn’t care about foreign surveillance, Oliver decided to make the interview as accessible as humanly possible. And that meant asking Edward Snowden, the most famous whistleblower in the world, whether the U.S. government was spying on pictures of people’s junk.

Now more than ever, it’s obvious why John Oliver isn’t taking over at The Daily Show. Last Week Tonight allows him the freedom to spend an entire half-hour show talking about one issue—including a surprisingly serious interview disguised as comedy.

Sure, Oliver had Edward Snowden say on camera, “Well, the good news is there’s no program named the Dick Pic Program,” but Last Week Tonight also got to air one of its most in-depth PSAs ever.

Considering John Oliver’s effect on the net neutrality debate last year, it will be interesting to see how his viewers react to this straightforward look at the dangers of government surveillance.