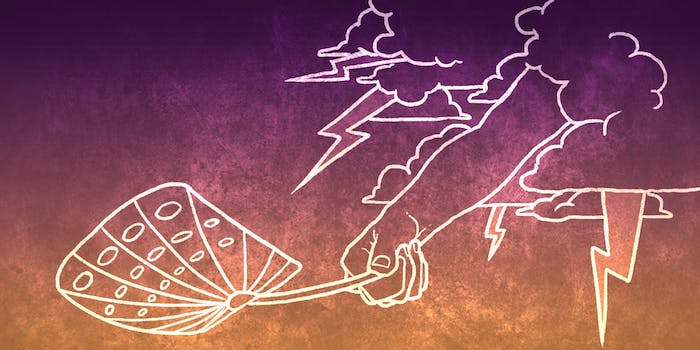 If you abuse emergency services, you may end up like him.

Brandon Wilson goes by the online name “Famed God.” While he certainly may become famous after his arrest, a pair of handcuffs has put the kibosh on that whole “God” thing.

Wilson, a 19-year-old from Las Vegas, stands accused of placing a prank call to a 911 center in Naperville, Ill., on July 10, 2014, in an attempt to get a SWAT team to burst through someone’s door. He was arrested on Thursday in Nevada and is sitting in jail there pending an extradition hearing to face charges in Illinois.

The charges against Wilson include intimidation, computer fraud, identity theft, disorderly conduct, and two counts of computer tampering, but anyone familiar with online troll culture knows that the proper name for what he did is swatting.

Swatting is the act of placing a fake emergency call to 911 services—usually with a report of a hostage situation, murder, or similarly dire circumstance—in order to convince the local police department’s armed-response units to enter someone’s home. Swatting became popular when people watching Twitch video-game live-streams began using it to disrupt those streams.

Wilson’s swatting call to Naperville 911 included a report of a murder. The Special Response Team (a.k.a. SWAT team) in Naperville responded to the call and discovered that it was a prank. Naperville and Las Vegas police worked together to carry out the search warrant at Wilson’s home that led to his arrest.

The computers seized during the search not only contained evidence of the swatting call, but also evidence of similar incidents across the United States. In addition, authorities claim that Wilson hacked into other peoples’ game consoles, and that in one case he threatened to access a gamer’s Social Security and bank accounts and put the person’s father “in debt for life.”

The Illinois State Attorney’s office said that Wilson could face up to five years in prison if he is convicted on all charges.

The consequences of a swatting call don’t end with the perpetrator, however. A demonstration of what it’s like to be a swatting victim came on the same day Wilson was arrested. Joshua Peters of St. Cloud, Minn., an Air Force veteran who goes online by Koopatroopa787, was livestreaming on Twitch when police officers stormed his house. In the ensuing confrontation, Peters’ little brother found himself staring down the barrel of a police officer’s gun.

Peters is now working with the authorities to determine who is responsible for his swatting.