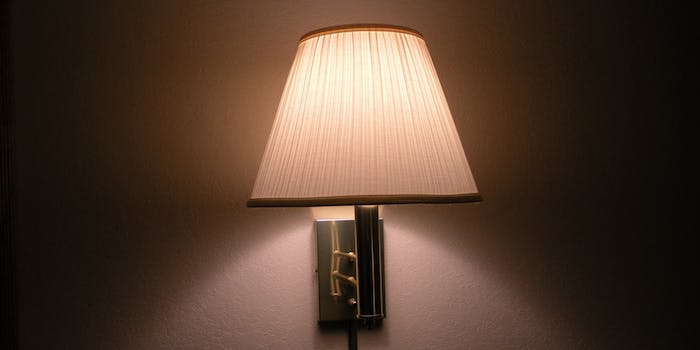 The Conversnitch is a lamp that livetweets your private IRL conversations

An art project is putting conversation snippets on Twitter.

Conversations people have on the street, in cafes and restaurants, and even on rooftops can end up on Twitter: You never know who is going to overhear and livetweet your breakups and bon mots. Amateur sleuths come in unexpected shapes and sizes; now, New Yorkers carrying on conversations they’d rather not broadcast should be careful not to sit too close to lamps. The Conversnitch, a DIY-eavesdropping device created by artists Brian House and Kyle McDonald, hides in light fixtures in undisclosed locations around New York City, and transmits overheard dialogue to Twitter.

The artists created the Conversnitch with a Raspberry Pi minicomputer, a microphone, an LED, and a plastic flower pot. It fits into any standard bulb socket, and transmits conversations happening around it to Amazon’s Mechanical Turk crowdsourcing service. The Mechanical Turk workers listen to the recorded audio and create Twitter posts from snippets of the conversation. The artists haven’t revealed the current location of the Conversnitch, but a video they posted shows the device planted in Washington Square Park, a bedroom, a bank lobby, and various other locations. It could be anywhere. ANYWHERE.

House and McDonald told the Mechanical Turk workers to make sure the posts obscure any revealing details about identity. Anyone who’s taken a writing class where the teacher makes students sit in a coffee shop and scribble down will be familiar with the mundane, grammatically fuzzy snatches the Twitter account posts:

“Absolutely because there will be funding for it for some time.”

“I bet you a million dollars it’s going to rain in the next hour. Then you’ll feel really stupid.”

“She did. Kicked him right out of the house. Because he refused to put the toilet seat down.”

It’s not like the Conversnitch is transcribing scintillating secrets or the kind of gossipy whispered back-and-forths that identify the speakers or, really, spark the reader’s interest to find out who said what, but the project still may raise objections from people opposed to the idea of being eavesdropped on in public. And that’s exactly what McDonald and House are going for with Conversnitch. They want the project to provoke questions about privacy boundaries, especially after details of the NSA’s surveillance programs made it clear that people are being monitored more closely than they thought.