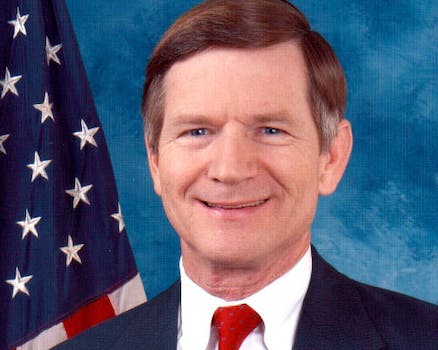 On the eve of a Web-wide protest against the measure, House Judiciary Committee Chairman Lamar Smith announced that debate over the Stop Online Piracy Act will resume in February.

Proponents of the controversial bill had claimed an early victory on Friday, when SOPA was indefinitely postponed and a clause—the blocking and rerouting of DNS requests for websites deemed to contain infringing content—was removed.  But Smith dismissed the delay as being due to the Republican and Democratic retreats taking place in the near future.

If anything, Smith seems more committed than ever to pass the measure. His statement reads:

To enact legislation that protects consumers, businesses and jobs from foreign thieves who steal America’s intellectual property, we will continue to bring together industry representatives and Members to find ways to combat online piracy. … “I am committed to continuing to work with my colleagues in the House and Senate to send a bipartisan bill to the White House that saves American jobs and protects intellectual property.

There’s nothing coincidental about the timing of the statement, either. Due to the ongoing blackout protest being led by Reddit and Wikipedia, national media outlets have finally started to pay serious attention to SOPA and its related bills. That’s forced Smith to further defend his stance on the bill.

He responded sharply to Wikipedia’s protest, in particular, and suggested some alternate reading during the blackout.

“It is ironic that a website dedicated to providing information is spreading misinformation about the Stop Online Piracy Act,” Smith said in a statement posted by The Hill. “The bill will not harm Wikipedia, domestic blogs or social networking sites. This publicity stunt does a disservice to its users by promoting fear instead of facts. Perhaps during the blackout, Internet users can look elsewhere for an accurate definition of online piracy.”