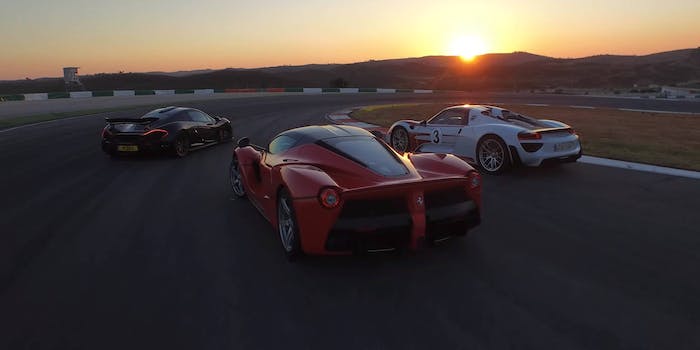 The LaFerrari, Porsche 918, and McLaren P1 finally face off

You can now see the holy trinity of hypercars battle it out.

The impossible has happened. The Porsche 918, Ferrari LaFerrari, and McLaren P1 have finally been put against one another in a fair track test.

This is coming from automotive journalist and television host Chris Harris, who somehow got all three companies to agree to bring their latest hypercars to duke it out to prove which reigns supreme.

Even Top Gear wasn’t able to pull this off.

The cars came together at the Portimao Circuit in Portugal. Harris was very keen on making sure the comparison was fair. The main area of contention between Ferrari and McLaren came down to tires. The P1 comes with two sets of tires, one for the track and one for the road. The LaFerrari comes with only road tires. To solve this, Perelli supplied Harris with P0 Corsa tires for all three cars.

Harris was the control racing driver who set the lap times for all three cars. This really was a track test aiming to be as fair as possible.

The best thing about the above video is that it’s 53 minutes long. If this test was broadcast on television, it would be hindered by commercial breaks. Since this video went straight to the Internet, Harris, along with British racing car driver Marino Franchitti, and Fifth Gear presenter Tiff Needell, could gush about all three cars for as long as they wanted.

The three hosts had trouble deciding which car they would want to go home with, as each company brought a different, but valid take to track performance. Ultimately the McLaren P1 edged out the Ferrari and Porsche—but just barely.

Screengrab via Chris Harris on Cars/YouTube