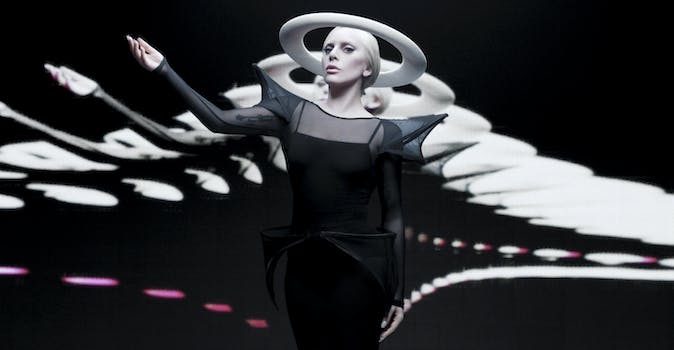 Lady Gaga’s impressive and moving tribute to David Bowie during Monday night’s Grammy Awards was one of the highlights of the music awards show. The nine-song tribute honored Bowie, one of the pop star’s heroes who passed away in January.

Along with Lady Gaga’s musical talents and Bowie’s transcendent music, what made the production so compelling was the tech that helped to power it. Everything from Lady Gaga’s makeup to the stage to musical instruments were modified using Intel technology.

The production opened up with digital skin, or an animated face of projected makeup that let Lady Gaga portray a number of different iconic Bowie looks in seconds without needing a costume change. The tech tracked her facial movements and applied the makeup wherever she looked. Additionally, Lady Gaga wore a ring powered by the Curie, a wearable module that let her control how the audience viewed her special effects by moving her wrists and arms.

Intel also turned Lady Gaga’s piano into a robotic device that moved along with the music with three robotic arms, and holograms controlled by the Curie-powered ring helped to generate a Bowie hologram.

“Two major elements here that kept us all tense right until the last minute,” Paul Tapp, director of technology at Intel, said in an interview with the Daily Dot. “One was we’d never done this stuff like this before, and second it was live.”

Intel started talking with Lady Gaga in September of last year, and as Tapp explained, the pop megastar is tech-friendly and not afraid to take risks in a performance. The wearable tech was one of the elements Lady Gaga wanted to incorporate into a production, but beyond that, she wondered how Intel might be able to assist with things like makeup that traditionally require costume changes.

Just before Christmas, the entertainer and tech company began solidifying ideas and locking down technically feasible plans in time for the mid-February Grammy Awards. Then, the unexpected happened. Bowie died of cancer in early January, and Lady Gaga decided to perform a tribute to the man who inspired her so much, and helped her become the performer she is today.

“To be honest, we were slightly nervous about the time frame that that then left us to go and work with,” Tapp said. “We agreed though, it makes total sense. You have to do it as an artist. And also, Bowie had such a rich catalog to work with. If you look back at his repertoire over the decades, there are so many looks, themes, colors, technology. He was also someone that just really broke the status quo.”

Despite the short timeline, Intel and Lady Gaga succeeded in creating an engaging and extravagant performance. When Lady Gaga moved, the stage environment moved with her, and even the piano danced.

This production might seem more tech-powered than traditional performances, whether they be live on television or on tour, but Tapp says that many artists are already using technology and the audience probably can’t tell. From complex lighting and audio to projectors and calibrating speakers and different types of content on stage, technology and tiny but mighty chips like Intel’s are the backbone that controls it all.

This isn’t the first time the pop star has collaborated with the tech giant. In January, Intel announced a partnership with Lady Gaga’s Born This Way Foundation to find technical solutions to online harassment and hate speech.

Intel hasn’t formalized any agreements to work with Lady Gaga again, or with other musicians, but it’s likely more artists will begin to intertwine technology and art in large performances.

“There’s so much pressure on stage artists especially musicians now, where the flow of money has changed the whole music industry, and performances are becoming increasingly important for them,” Tapp said.

“The expectations of the audience these days is just going higher and higher … I think that when a creative artist says how can I use technology to unshackle the traditional constraints and liberate my creative freedom, if they’re willing to work with that process and research what technology is available to help them do that, I believe they’re going to be able to do a ton of new things which have not been possible before.”