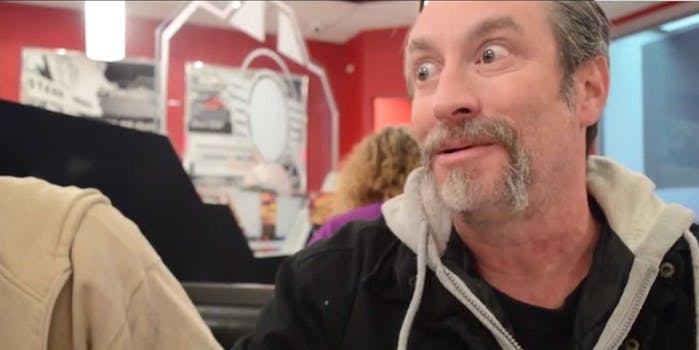 They met in a fast food restaurant—where else?

A week after Anonymous opened a cyberwar against the Ku Klux Klan, representatives of each group sat down to speak with one another to speak about about rising hostilities between the organizations in the midst of threats being made against protesters in Ferguson, Mo.

“We definitely don’t believe in promoting no violence,” KKK Imperial Wizard Frank Acona said in the middle of a Steak ‘n Shake fast food restaurant—where else?—in an effort to distance himself from the Klan’s infamous 149-year history of hyperviolent anti-minority action.

“Why would we want to see innocent people getting hurt?,” Acon, who wore a big red “KKK” belt buckle hidden under his jacket, asked rhetorically.

Alex Poucher, a self-described member of Anonymous, sat opposite Acona in the restaurant and offered a short list of questions to which the KKK’s most vocal leader in Ferguson gave lengthy defensive responses.

The fight between the the Klan and Anonymous began when a flyer threatening “lethal force” against Ferguson protesters began to circulate online.

“You have awakened a sleeping giant,” the flier read. “The good people of St. Louis County of all races, colors and creeds will not tolerate your threats of violence against our police officers, their families and our communities.”

Acona attempted to blame the media and those “trying to destroy” the KKK for stoking current hostilities, saying the flyer was referring to frightened residents defending themselves and their property.

“We’ve got people who live there who will defend their homes and businesses,” Acona said, “but we’re not sending an army down to Ferguson to start a bunch of trouble. In fact, no one’s even gonna know we’re there.”

Acona said he believes Ferguson Police officer Darren Wilson, whose shooting of 18-year-old Michael Brown in August sparked months of protests, was “in the right,” and stressed that he also believed in protester’s right to free speech.

Acona has said that the Ferguson protesters have been “the best recruiter since Obama.”