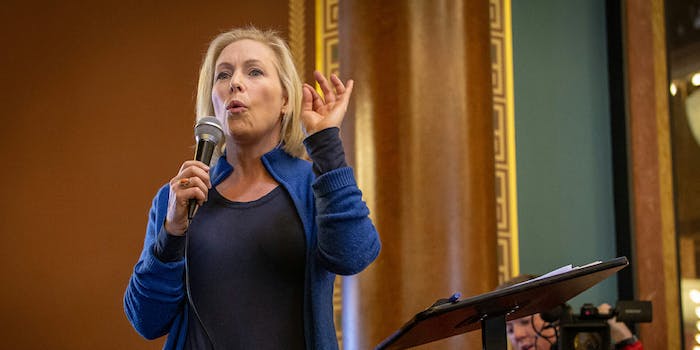 Sen. Kirsten Gillibrand (D-N.Y.), a 2020 Democratic presidential hopeful, announced on Wednesday her plan to legalize marijuana in the country.

Gillibrand, who is among a massive list of candidates vying for the chance to take on President Donald Trump in the 2020 election, said ending the decriminalization of marijuana would be a “top priority of my presidency” in a Medium post outlining her plan.

In the post, the New York senator said she would immediately de-schedule marijuana as a controlled substance.

The plan also calls for expunging the criminal records of those who were convicted of non-violent marijuana crimes, taxing recreational marijuana across the country, and using that money for programs that “help repair the damage done by the War on Drugs.”

“Nothing proposed today can ever undo the devastating harm done to generations of communities and families of color by the War on Drugs,” Gillibrand wrote. “But it’s long past time to start making this right. With this plan, we can begin to dismantle the institutional racism in our criminal justice system, open up important new medical and economic horizons, and lift up communities who need and deserve a fair shot at opportunity.”

You can read all of the New York lawmaker’s post about her marijuana legalization plan here.