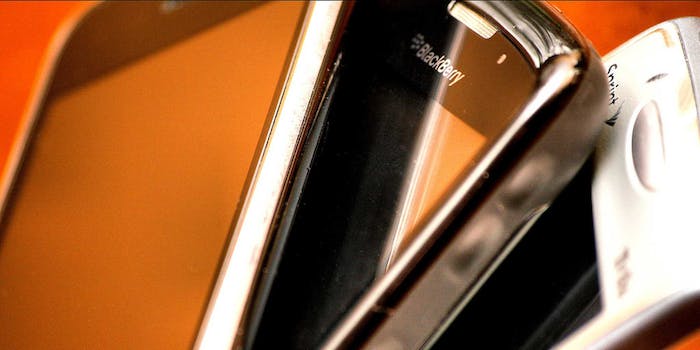 In recent years, the rate of smartphone theft surged in cities across the country. In 2012, one-third of all robberies in the United States involved the theft of a cellphone. In places like San Francisco, smartphones account for half of all robberies. Law enforcement officials largely agree on a single technological solution to the problem—the installation of kill switches on all new devices that would allow cell service providers to remotely and permanently disable stolen phones making them essentially worthless on the resale market. The hope is that if kill switches become ubiquitous, thieves would no longer have an incentive to target smartphone owners.

A recent study by a professor at Creighton University in Omaha, Neb. found that not only is the idea of universal smartphone kill switches overwhelmingly popular with the public, but its implementation could save consumers up to $2.6 billion per year.

The study, which was conducted by Dr. William Duckworth, surveyed 1,200 smartphone owners and found that 99 percent of them felt that wireless carriers should give all consumers the option to disable a stolen cellphone. 83 percent of respondents believed that kill switches would reduce cellphone theft and 93 percent felt that they shouldn’t have to pay an extra fee for the ability to disable a stolen phone.

Duckworth then estimated how much money would be saved every year if cellphone manufacturers were required to put kill switches on all phones sold in the United States. Duckworth noted that Americans spend about $58 million each year replacing stolen cellphones, $4.8 billion for premium phone insurance plans offered by wireless carriers, and then another $2 billion per year on cheaper, third-party insurance plans. Just over 60 percent of respondents reported they would be less likely to buy theft insurance if the number of smartphone thefts dropped significantly.

Using all of these figures, Duckworth estimated that the full-scale implementation of kill switches could save $2.8 billion annually.

Duckworth said in an interview with Network World that he didn’t expect to see such universal support for kill switches. “I thought a high percentage would say yes, but it was a little surprising and maybe a bigger number than I would have guessed,” he explained. “I view losing a credit card as a similar frame of reference. If it is stolen or lost, I can call the credit card company and get it canceled and they can issue a new one. There is safety there… My smartphone has tons of information and accounts in there, so the idea that I could call and say ‘kill it’ is a very reasonable thing.”

Duckworth’s findings beg the question: If kill switches are so wildly popular, have the potential to save billions of dollars, and would likely reduce crime, why aren’t they in every phone? The answer is fairly simple—cellphone companies don’t want to implement them.

CTIA, an trade group representing the wireless telecom industry, argued in a fact sheet released last year that, ‟this capability would be in every handset and the ‘kill’ message would be known to every operator and therefore could not be kept secret,” thereby creating a ripe opportunity for hackers to do large amounts of damage.

The group also posited that disabling phones such that they couldn’t even call 911 is a safety risk and that people who rediscovered devices they incorrectly believed to be stolen would be forced to pay out of pocket for expensive replacements.

San Francisco District Attorney George Gascón, who has been spearheading efforts to implement kill switches as a crime reduction measure, was critical of the telecom industry’s reticence on this front after a plan to install anti-theft software on Samsung devices was scrapped when wireless carriers like AT&T and Verizon refused to support the initiative. Gascón told the New York Times late last year that emails he had seen between a Samsung official and mobile software developer indicated that industry opposition is rooted in phone companies’ desire to have more people pay for expensive insurance plans due to a fear of theft.

“Corporate profits cannot be allowed to guide decisions that have life-or-death consequences,” Gascón said. “This solution has the potential to safeguard Samsung customers, but these emails suggest the carriers rejected it so they can continue to make money hand over fist on insurance premiums.”

Some wireless carriers have instituted their own anti-theft measures, all of which stop short of letting users permanently brick their phones with a simple message to their carrier, but those programs are both opt-in and not universal. Kill switch proponents argue that the only way for for their plan to have its intended crime reduction effect is for virtually every phone on the market to carry the feature. If that were to happen, criminals would know that any attempt at a smash-and-grab for a cellphone would likely end with them having stolen an ultimately worthless piece of equipment.

A California state senator has introduced a bill that would mandate all mobile devices sold in the state come with a kill switch. A handful of Democratic legislators have introduced a similar bill at the federal level. The telecom industry has publicly opposed both of these bills.

Instead, the industry’s solution has been the creation of a nationwide database of stolen phones. Phones listed on this database are barred from being reactivated on the networks of participating wireless carriers. However, critics have argued that the database, which was launched in 2012, has done little to curb smartphone theft because it only covers phones used within the United States and many stolen devices are shipped overseas to be sold. Additionally, it’s possible for thieves and their accomplices to change a stolen phone’s unique identification number, thereby allowing it to be reactivated even though the device previously had been entered into the industry’s database.

Even so, in an email to the Daily Dot, Duckworth said that legislative solutions aren’t necessarily the only way the widespread adoption of kill switches could occur. ‟Apple implemented something like a kill switch in iOS 7 [called Activation Lock] last fall due to consumer interest. Other phone OS companies could do something similar but haven’t yet,” he explained. ‟I don’t think a law is the only way. As consumer concern grows, you may see more solutions like Apple’s iOS 7 solution to this issue, but how many more phones might be stolen if those solutions come slowly is a concern.”

Even so, there’s no way of being sure that enterprising, technically savvy thieves couldn’t find ways of bypassing any attempt to brick stolen smartphones. There are already guides online detailing how to easily bypass Apple’s Activation Lock in a matter of minutes.