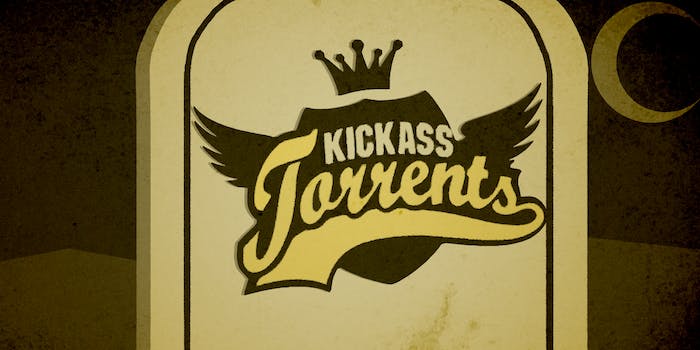 Back from the grave to kick some more ass.

KickassTorrents may be gone, but the reports of its death have been greatly exaggerated. Less than one day after the popular file-sharing site was seized by U.S. authorities, a clone of the service called KAT.am has taken up the mantle.

The copy of KickassTorrents sports the same appearance of the original and appears to replicate just about everything in place on the well-trafficked torrent site, from the torrent database to user information and comment history.

The creator of KAT.am, who preferred to remain anonymous, told the Daily Dot that some features are still being restored, but his team has taken “extreme care” to make the service as similar to KickassTorrents as possible.

The team behind KAT.am are no strangers to bringing torrent sites back from the dead; according to the site’s creator, they previously resurrected the Pirate Bay and maintained a mirror copy of the service.

“We have since maintained a backup of data on the original [KickassTorrents] site in the event that it goes down. Having a backup in place, and past experience in this area were the factors that helped a quick resurrection of the site,” KAT.am’s creator explained.

He said the team has “long been advocates of freedom and are against censorship” and were motivated by that to recreate KickassTorrents.

Given the recent and high-profile pulling of the plug on KickassTorrents, its copycats are sure to be targets for take down as well. The creator of KAT.am seemed sure that he and his team had taken the proper steps to ensure the new site would remain online.

According to the creator, the site is hosted on a “pool of self replicating cloud servers,” and builds copies of itself on said servers. It then updates CloudFlare, which KAT.am uses as its content delivery network, with the latest version of the site.

While the team is working to automate the system fully, the creator claimed “in the worst case scenario, even if we are not there to manage affairs, the content would still be available.”

Beyond just giving KickassTorrents a place to continue existing online, KAT.am’s creator plans to build upon the functionality of the original, including launching a mobile version of the service.

A federal affidavit claimed KickassTorrents was taking in more than $16 million in advertising revenue as of this year.