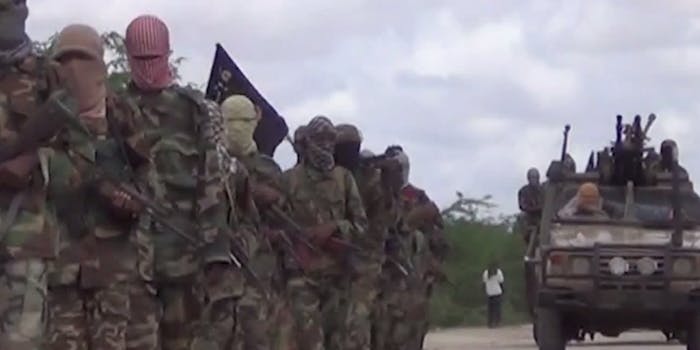 The men were part of al-Shabab, a Somalia-based terrorist group of Islamic militants who have been attacking eastern Kenya for the past nine years. On the Garissa campus, al-Shabab members separated the Christians from the Muslims before the bloodshed. Many were reportedly beheaded during the 15-hour attack.

Heavy gunfire & explosions inside the university. I met Anastacia at the airstrip with serious gunshot wounds. pic.twitter.com/ZcKQTOQnzh

The gunmen are holed up inside the upper hostel section. I can hear gunfire from the other end @ntvkenya pic.twitter.com/BJfqBX7QFy

Heavy gunfire for the last 10 minutes. Never heard anything like this. Smoke coming out of the hostel @ntvkenya pic.twitter.com/srAEgNxWa8

The death total—as well as the eventual death of all four terrorists at the hands of Kenyan police—were both confirmed by Kenya’s National Disaster Operation Center via Twitter.

U{PDATE: The operation at Garissa University College has ended, with all four terrorists killed.

UPDATE: 147 fatalities confirmed in the Garissa Attack. Plans are underway to evacuate students and other affected persons.

It’s the most violent terrorist attack in Kenya since al-Shabab murdered 67 people in a Nairobi shopping mall in 2013. In Arabic, “al-Shabab” means “the youth.” The rogue military is estimated to harbor somewhere between 7,000 and 9,000 soldiers.

The Kenyan government also issued a “most wanted” reward of 20 million Kenyan shillings (roughly $215,000) for senior al-Shabab lieutenant Dulyadin Gamadhere—though his role in Thursday’s attack has not been defined.

We appeal to anyone with any info on #Gamadhere to share with relevant authorities and security agencies. pic.twitter.com/YQ3MCvER4D

Kenyan President Uhuru Kenyatta issued a written statement that called for 10,000 police recruits to report in person for service—citing a staffing shortage.

I am saddened to inform the Nation that early today, terrorists attacked Garissa University College killed and wounded several people and have taken others hostage. The full details of casualties will be communicated in due course by the Cabinet Secretary for Interior and Coordination of National Government who is coordinating operations with the Inspector-General of the Police in Garissa.

On behalf of my Government, I extend condolences to the families of those who have perished in this attack. we continue to pray for the quick recovery of the injured, and the safe rescue of those held hostage.

I also assure the Nation that my Government has undertaken appropriate deployment to the affected area, and is fully seized of the situation. I also urge Kenyans to stay calm as we resolve this matter, and to provide the authorities with any information they may have in connection with any threats to our security. This is a moment for everyone throughout the country to be vigilant as we continue to confront and defeat our enemies.

I further direct the Inspector General of Police to take urgent steps and ensure that the 10,000 recruits whose enrollment is pending, promptly report for training at the Kenya Police College, Kiganjo. I take full responsibility for this directive. We have suffered unnecessarily due to shortage of security personnel. Kenya badly needs additional officers, and I will not keep the nation waiting.

Amid the reverberating tragedy, several world leaders rushed to process and condemn the acts.

Deeply distressed by the Garissa attack in Kenya today. We extend our deepest condolences to all who have been affected.

We extend our deep condolences to the families and loved ones of all those killed in this heinous attack in #Kenya pic.twitter.com/hB39YF9oZe

The appalling terrorist attack in Kenya is truly heartbreaking. The international community must intensify efforts to root out such evil.

Our condolences for the lives lost in the Garissa attack. #Rwanda stands in solidarity with #Kenya & the region against terrorism

The U.S. has launched drone strikes over the past year against al-Shabab. Reportedly weakened, Thursday’s attack may have been a result of its halted efforts to seize territory and focus on short-term terrorist acts.