The state attorney general, who made headlines last June for asking the Supreme Court to uphold Virginia’s archaic anti-sodomy law, has landed in hot water for using an unauthorized, copyrighted photo of a pug in a campaign ad against his opponent, Democratic gubernatorial candidate Terry McAuliffe.

The ad, posted on Cuccinelli’s Facebook page last night, shows a mournful-looking pug puppy with a collar around his neck that says “Virginia,” accompanied by the words “Terry McAuliffe: All puppy, no plan.” 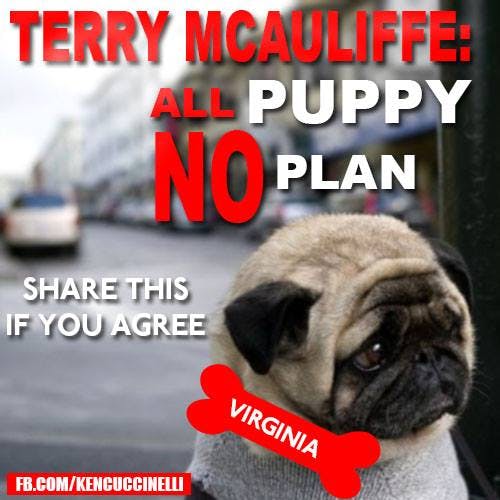 The quote-unquote “slogan” (which, next to the 1905 Tariff Reform League’s, is probably the least catchy in political history) refers to a joke Cuccinelli made at the gubernatorial debate on Thursday, which took aim at McAuliffe’s unfocused economic policy. “I like puppies. But I don’t bring a puppy home if I don’t have a plan to take care of that puppy,” said the Cooch, adding, “[McAuliffe] is all puppy, no plans.”

Unsurprisingly, Cuccinelli’s puppy remark—and his PR team’s subsequent attempt to turn it into a thing—drew mockery on Twitter last night. Many were simply baffled by the slogan, and some took the opportunity to draw attention to the Cooch’s not-so-stellar record on animal rights. The response from digital communications expert Greg Greene, however, took the cake (bone?):

.@KenCuccinelli Also, @luluthepug would prefer that you keep her friends the heck out of this. https://t.co/ws7Av4w8Qd #VAGov

@ggreeneva @KenCuccinelli and covered up the copyright notice with a link to Facebook! That’s ballsy.

.@KenCuccinelli Its tough to make any ad featuring a puppy nauseating, but you managed it. Nice job.

It turns out that the photo is from Flickr user Christopher Michel, a San Francisco–based entrepreneur and photographer whose pug, Mr. Newman, appears in his series “World’s Saddest Dog.” Michel commented on Cuccinelli’s usage of the photo on his Facebook page last night: 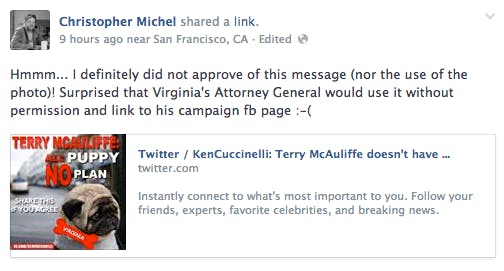